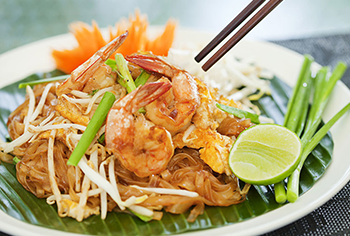 Nothing tastes better than what your mom makes with her secret ingredient called love. Still, it would be nice to sample some of the other cuisines that have people buzzing all over the world. That’s where this article drops in from. If you’re out touring the globe, we recommend you take this with you.

Earth has lots of tasty treats that your mouth will happily welcome. Here are some of the best cuisines that you should consider trying out on your travels abroad. Of course, you could get a cookbook but still.

If you’re into hot and spicy goods, then you’ve hit the motherlode with Mexican cuisine. It aims to satisfy your taste buds in many ways than you can imagine. There is a variety of spices and flavors that you have to try. Mexico is the one place which makes great use of chili peppers in its dishes.

Well, there is no surprise that one of the most popular states in the world can whip up a good grub. Many of their favorite dishes actually originate from other states. Some of them include pizza, which hails from Italy, hamburgers probably from Germany and potato fries from Belgian. But there’s also homemade stuff like key lime pie, Cobb salad, and clam chowder.

Eating Indonesian cuisine is like traveling the world. You may not believe this but China, Spain, Japan, Portugal, and India have influenced many of their dishes. Indonesia has the kind of food that anyone from around the world can enjoy to their heart’s desire.

Thai cuisine is another example of diversity and variety all packed into one. There is a mess of spices, herbs, and seasonings that you can try out. There are complex flavors, but they are all the more scrumptious with every bite. It gets its influences from China, Myanmar, and Indonesia and has a touch of royalty to it. You have to try out the signature Tom yam kung, Massaman curry, and Som tam and witness the fireworks in your mouth go off.

This is the place where you will know about the origins of pasta and pizza. Italian cuisine has been around for over 2400 years and has drawn inspirations from the culinary traditions of the Jews, Greek, Roman, and Etruscan. They’re even fusilli, lasagna and maccheroni and a host of other pasta dishes that will send you to another level.

Greece is the place where olive oil got its significance from. There is feta cheese, kalamata olives, spanakopita or spinach pie and gyros. Many of these exquisite dishes will make it seem as if you are dining like a Greek god.

If you wish to taste the flavors of romance, nobody does it better than the French. The chocolates are one thing but everything from beef stew to fish and the stellar bonbons is why France is renowned throughout the planet. The entire state is simply fixated with cheese and wine. Try the sweet succulent macarons, the escargot and the legendary French bread known as the baguette.

The scintillating aroma, the erupting flavors, and the satisfying aftertaste is what you will be remembering of when you visit Spain. Here is where you get to experience 9 pm dinners, infinite porron challenges, tapas-eating and fewer amounts of work. The churros are waiting for you there.

Japan is synonymous with a number of things like sushi, tofu, rice, noodles, soup and anime. One of the many reasons why Japanese food is so marketable is because it is low on fat light to digest.

We hope that this is enough to keep your mouth-watering and try out some of these dishes today.

Ashley Martin works as a food blogger for Essay Help Deal. She is a culinary expert and you will find plenty of articles on her blogs regarding the culinary skills, dishes around the world and diets. You can follow her on Facebook | Twitter | Google+.