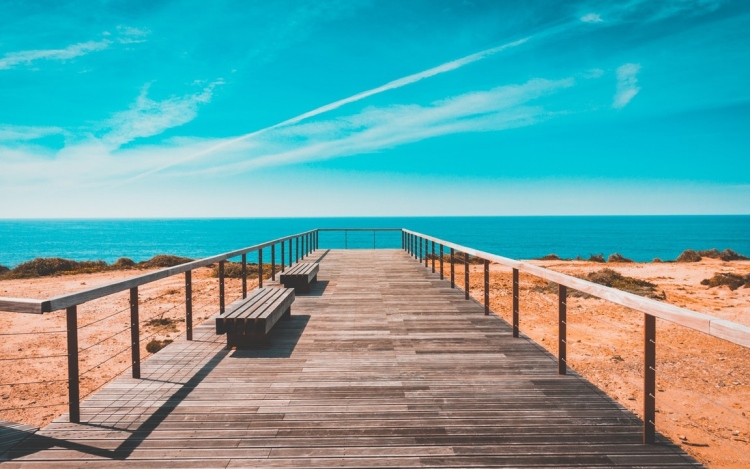 The first thing my husband and I discussed after getting engaged was where we’d like to travel for our honeymoon. We are both quite keen travelers, and we had so many places we still wanted to see on our lists, that it took us a while to settle on just one location.

Finally, we settled on Portugal. The original idea was to visit Lisbon first, but then we decided we’d rather go somewhere more beachy. So, we booked ourselves a great holiday in the Algarve, since it would have something for both of us. I’m more into lounging on the beach and having a cocktail, while he’s more into exploring and having an active holiday. The Algarve had something for the both of us. As we were actually arriving from France, we decided to first stay in Tavira. It is rather close to the Spanish border, and is an amazing town with a fabulous Roman Bridge across the river Gilão. We spent four days there.

What we were soon to learn is that Tavira is famous for its churches. In fact, it has more of them than any other town in Portugal. We couldn’t possibly see them all, so we made a short list, and started exploring. My favorite was one called the Misericórdia, built during the Renaissance, which has some amazing tiles and is rather charming.

Another thing I fell in love with were the orange trees. They seem to be everywhere. We completely got used to having coffee in small taverns on corners, with the oranges so near, smelling wonderful.

Nearby is an island called the Ilha de Tavira, where I could satisfy my bathing and sunbathing needs. You can only get there by boat, which was another part of the adventure, as I naturally dropped my sunglasses into the water hallway across. The island itself is lovely, and the water was great!

Next, we headed out to Faro, the capital of the Algarve. This is actually where you tend to land if you are flying in, but as we drove part of the way, we did not. What I remember most about it is the Cathedral Square, from our very first afternoon in town. There is a chapel there decorated with bones, which was naturally something I had to see, being such a fan of everything gothic and horror-related.

There are also much more people to meet in Faro, and we had a bit of a struggle to get ourselves a table at some taverns. However, the food itself was amazing everywhere we went, which is something we would learn is the case absolutely everywhere in the Algarve.

We also made the most of being motorized and drove out to Mesquita, which is a village near Faro famous for its lamb. The trip was wholly worth wile, since we both probably gained a pound while there.

We finally set out to Albuferia, where we were to soak up the sun in our resort. It was formerly a fishing town, located on the cliffs above some of the most amazing beaches my beach-loving eyes have ever seen. The resort itself is very modern, but some of the old houses still stand, and make for a wonderful photo opportunity.

The Old Town was charming and provided the necessary entertainment. There are musicians there playing in the streets, the crowds are all smiles and suntans, and the nightlife is also great. The food was naturally amazing, as was the wine, but what I loved most was the fish. I have yet to eat better fish than the one we had practically every day in the Algarve.

The beaches themselves are thought to be the best in Portugal, and I can’t help but agree. The sun was amazing, the waters were perfect, and we had an amazing time bathing morning, noon and night, before starting off on our drive back home.

If you are contemplating your own honeymoon destination, or would just like to take a tour of the Algarve, I can’t recommend it highly enough. The region simply has everything, from historic sites to amazing beaches, to delicious food and wine. Make sure to explore as much of this wonderful region as you can!