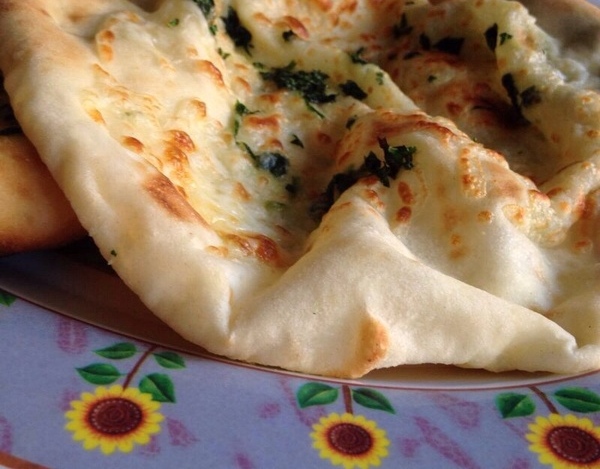 Naan is an oven baked, leavened flatbread mostly featuring in cuisines of Central Asia, Malaysia and South Asia. In particular, Naan is popular in the cuisine of North India, Bangladesh, Pakistan, Iran, Uzbekistan and Afghanistan.

The term Naan in English featured first in an 1810 travelogue of William Tooke. The term originated from many languages in South and Central Asia and refers to a form of flatbread.

For example, in Iran from where this food item originated, naan is a generic term referring to all kinds of bread. This is true of even West Asian countries and Azerbaijanis, Turks and Kurds. In South Asia, it refers to a specific kind of flat bread which resembles the Pita bread and is leavened with bread starter (leavened dough of leftover naan) or yeast. Sometimes, unleavened dough may be used.

The Naan originated in India but it today cooked in homes and South Asian restaurants all over the world. It has undergone transformation from one basic kind of bread to creations experimented by chefs with different flavours and fillings. For instance, butter naan is laced with butter.

The first reference to Naan is discovered in the writings of poet Amir Khusro, dating back to 1300 AD.  Naan was cooked originally in the Imperial Delhi court in two forms: Naan-e-Tanuri(Naan cooked in Tandoor) and Naan-e-tunuk(light bread).

At the time of the Mughal era (starting from 1526), Naan was served withKebab(meat fritters) and Keema(minced meat) as a popular items for breakfast. In 1926, Veeraswami, the oldest of Indian restaurants in London, served Naan for the first time on its menu.

Which came first- Naan, Pita bread or Chapatti? The surprise is- it was yeast. Yeast was used first around 4000 BC by the Egyptians but its value was not known until much later. Most flat breads during the period 4000 BC to 19th century AD were unleavened.  Pita bread was the first type of flat bread. When it comes to Naans, they were cooked in 14th century and Chapattis in 16th century.

Naan is cooked usually in an oven called Tandoor, from which the term Tandoori is derived. This makes it different from flat bread called roti which is cooked on an iron griddle called as Tava. In modern recipes, yeast is replaced by baking powder. Yogurt or milk may be added to provide unique taste to the Naan.

When milk is added it takes the form of soft dough, like in the case of milk bread. When bread starter is used, milk will undergo modest lactic fermentation.

Usually, naan is served hot with vegetarian or non-vegetarian gravy curry. It may be brushed with butter or ghee. It can also be used to cover fillings made of other foods. For instance, Keema naan has a stuffing of minced meat mixture.

Kashmiri naan and Peshawari naan is filled with a mix of raisins and nuts. Pakistani Roghan naan is sprinkled with sesame seeds. There is also Amritsari Naan which is stuffed with spices, onions and mashed potato. Potential seasonings in the Naan dough include nigella and cumin seeds. Lacing with butter is how to makeButter naan.