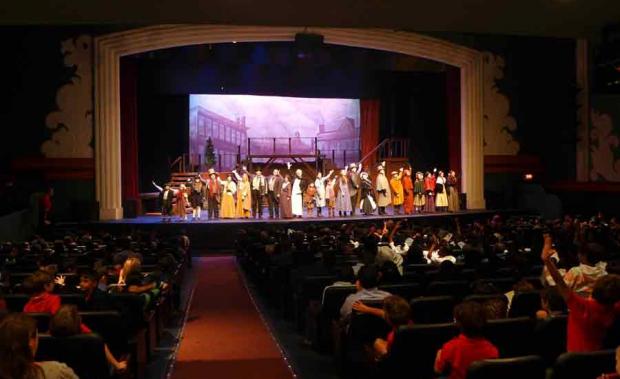 As people around the world celebrate the abundant talent of New York’s writers, directors and actors, the spaces that provide the stage for this talent often go unnoticed. And that’s a good thing: after all, good theater space will be invisible, never taking the audience’s attention away from the action on stage with bad acoustics or confusing layout.

Nevertheless, the space is crucial to any play’s success. Fortunately, New York is full of great theater spaces, from stately turn-of-the-century beauties to cozy makeshift stages.

Located in the heart of Manhattan’s West Village, the small and comfortable 150-seat Actors Playhouse has grown to become the center of gay and lesbian culture and experimental theater. It has hosted such great plays as Naked Boys Singing, Marijuana-Logues, and the one-man performance from Fraser’s openly gay actor Dan Butler, The Only Thing Worse You Could’ve Told Me.

This theater, tucked away in a small townhouse just minutes away from the site of the World Trade Center, served as a fitting venue for the long-running play The Guys, celebrating the lives of New York City’s firefighters who died on the morning of September 11th, 2001. The tiny room has no stage: the actors perform on the floor, while the small 20-plus audience sits in rows of chairs lined along one of the walls. This living-room theater experience only adds to the impact of The Flea’s experimental and often hard-hitting plays: the audience gets to see every nuance of every performance, feeling the actors’ joy and sadness, rage and ecstasy.

The unassuming name of this small East Village performance space belies its great roster of experimental plays, music, dance, and performance art. This is where you come to see plays with such unlikely names as Up Your A** – an all female musical version of the revolutionary anarchist play by Valerie Solanas, which was lost for many years and rediscovered under a pile of equipment in Andy Warhol’s old studio. Avant garde Fringe Festival comes through here every year, and playwrights often use the space to perfect their work before taking it to larger stages.

Another performance space famous for its association with the Fringe Festival is The Kraine: a small room with amazing acoustics which slopes sharply to the floor that serves as the stage. The view from the last row is as good as the view from the first – and the shape of the space provides such great amplification that performers don’t even need microphones.

Part of Brooklyn College, the Brooklyn Center for the Performing Arts serves as a workshop for the school’s theater department, and as such, can be a very uneven experience. This is where undergrads cut their teeth on such old faithfuls as Shakespeare and Chekhov, and graduate students often turn in stellar performances in everything from Marvin’s Room to Six Degrees of Separation. When the stage isn’t filled with students, it hosts famous musical, dance and theater troupes from around the world, presenting unusual and eye-opening multinational performances.

This mid-sized Midtown theater often hosts plays by famous authors before they go on to Broadway. This is where Edward Albee debuted his masterpiece The Play About the Baby. The space is large enough to look like a real theater, but not large enough to have an upper level – and this gives it a comfortable chamber atmosphere conducive to experimentation.

The Henry Miller Theater is set firmly in the midst of Broadway territory – but its posh location hasn’t stopped it from hosting some decidedly un-Broadway productions. For the star-studded production of the satirical musical Urinetown, for example, the stately classical space was transformed into a leaky, rusty, murky space replete with the soundtrack of dripping water. Despite its dressed-down look, the theater’s ticket prices are worthy of Broadway, but the space and its playlist make the price well worth it.

Another quintessentially Broadway theater that is not afraid of experimentation, the John Golden Theater has hosted such acclaimed – and controversial – plays as The Goat, which tells the story of a man in love with, well, a goat, and the puppet romp Avenue Q. The stately building loses none of its charm and beauty as it transforms to fit classical plays and avant garde performances.