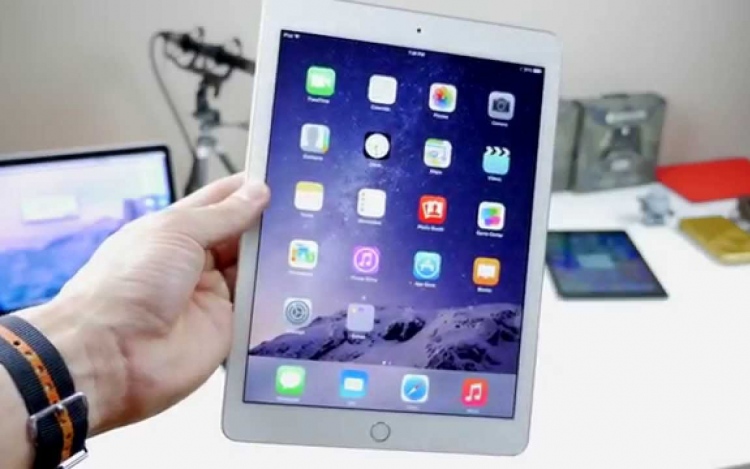 Immediately after the introduction of iPad 2 in San Fransisco, Steve Jobs invited journalists to visit a special area to get the first taste of the iPad 2. Because iPad 2 is not available until March 11, obviously members of the media tried to spend some quality time with the new tablet.

At the time of the launch, Apple introduced the tablet in two colors, black and white. Visually the iPad 2 is lighter and thinner than its predecessor. Those who have been following its development and news won’t be surprised by this fact. One interesting fact is its ergonomically better design. Although the original iPad was a perfect combination in thickness and weight, it is a little inconvenient to hold, which means a case is necessary for prolonged uses. The iPad 2 is reported to be more comfortable to hold, while the slight decrease in overall weight and thinness does help, no doubt.

You’ll see that both iPads are made from similar physical materials, with an aluminum back and glass front. However, with the iPad 2, the aluminum frame edge can’t be seen from the front. Due to the reduced thickness, putting ports and buttons is trickier, however Apple managed to place them nicely on the top right corner of the device. Overall the new tablet offers a very different feel, if you use the original iPad often.

One major addition is a pair of cameras, on the front and on the back. Just like on other Apple’s latest mobile devices, these cameras support FaceTime video conferencing. However, they are definitely produce lower quality images and videos compared to the 5-megapixel camera found on the iPhone 4. iPad 2’s cameras could be of the same types found on the iPod Touch line.

Other changes are less perceptible, for example, the pinhole microphone on iPad 2 is now positioned on the top back of the device, while on the original iPad, it was located near the headphone port. Because of the thinness, the speaker is now placed on the back, with a grille design that looks more like MacBook Pro’s speaker. The sound quality could be equal or slightly better than the original iPad. There will be three versions of iPad 2, the first is a Wi-Fi only version and the other two support 3G connection, Verizon and AT&T each. Just like the original iPad, the 3G versions will have a black plastic strip. The AT&T version can be distinguished by its MicroSIM slot.

The new tablet also features an integrated covers, called Smart Covers, so integrated that the iOS 4.3 has a configuration menu that manages the cover.

The new cover has a rectangular shape, with the size that match the iPad 2’s screen. The inner side is made of soft microfiber cloth, while outer side is either polyurethane or leather; that is available in five color selections. The cover uses metal hinge and small magnets at both ends, they will attach on magnets embedded inside the iPad 2’s chassis, when you drag the cover near the edge. It may be tricky to use the cover for the first time, but after a few tries, it should all went smoothly.

However, Smart Cover is not just a simple cover, because when you open it, the iPad 2 automatically bypasses the lock screen procedure, wakes up and ready for use. There is a menu in the iOS 4.3 that allows you to configure behaviors related to Smart Cover, for example to disable the automatic wake-up feature. Just like the current iPad cover, it can be flipped to make a stand and folded to provide a slight incline for more comfortable typing and reading. The Smart Cover is sturdier; unlike the original iPad’s cover that tend to wobble a bit.

The new tablet is genuinely faster. iMovie and GarageBand are apps that presumable tax hardware resource to its limit in the original iPads. But, in the iPad 2, they can run much more smoothly. The heart of the iPad 2 is a dual core processor called A5, which is claimed to be twice faster than the older A4. Apple promises that the graphic performance of iPad 2 will be nine times faster than that of the original iPad. Although faster, the A5 processor will have comparable power consumption than its predecessor. It means that despite the improvements on performance, you can still use the iPad 2 for around ten hours. Apple’s latest processor certainly brings Cupertino up to par with other high-end mobile processor, such as Nvidia Tegra2 and Qualcomm’s MSM8620.

The iOS platform has an unprecedented growth, with more than 160 million iOS-based devices. The iOS 4.3 was introduced in March 2, which includes new features such as Nitro JavaScript engine in the Safari browser, improved AirPlay, iTunes Home Sharing and Personal Hotspot.

If you enjoy the mobile Internet experience in iOS 4.2, you’ll love Safari in the iOS 4.3 even more. The Nitro JavaScript technology that was pioneered on the Mac is now available on latest Apple’s mobile devices. It doubles the JavaScript execution performance, which allows you to have better interactivity with today’s increasingly complex and sophisticated sites.

The new OS includes some enhancements to the AirPlay, other than wireless streaming of music, video and photo to Apple TV, with iOS 4.3 you can finally stream more contents including videos from web sites and third-party applications. Photographs can now be brought to life with advanced and stunning slideshow feature. It also supports direct live streaming from iPad 2’s camera to the Apple TV.

In the iOS 4.3, the iTunes Home Sharing allows you to run TV shows, photo, movies and music, from Windows-based PCs and Mac. You just need to tap an icon on the iPad 2 to enjoy everything in the iTunes Library at home. It means you can stream movies from a Windows 7 PC in your living room to your iPad 2, while you’re in the backyard or bed.

With iOS 4.3 and the iPad 2, you can now bring Wi-Fi technology with you anytime and anywhere. The Personal Hotspot supports up to five Wi-Fi, three Bluetooth and one USB connections. Joining the wireless network is easy, with a user-friendly indicator that shows the current active connections. Each connection is protected by password and idle connection is automatically terminated to conserve battery life.