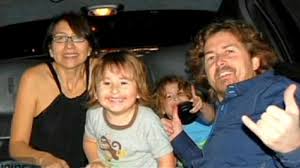 The bodies of a family of four that disappeared in 2010 under suspicious circumstances have been found in the desert in California. The victims were the McStay family, who were from California, consisting of Joseph & Summer McStay, and children Joseph and Gianni. Authorities confirmed that the bodies are actually the McStay family, confirmed with dental records. The bodies were found in the desert near Victorville, CA according to San Bernadino County Sheriff John McMahon. They have been missing for about three years. Authorities say that there will be DNA testing to further confirm the identification of the victims.

The authorities did not identify how the family was killed, but McMahon did say that no suspects have been identified at this time. Understandably, there was quite an emotional reaction from the family of the victims that were at the press conference. “It gives us courage to know they are together, and they’re in a better place,” said Mike McStay, the younger brother of Joseph. The bodies were discovered by a passing motorcyclist, who called police after he believed that he had found human skeletons. Police investigated and found the two adults located in one shallow grave site, and the children in another. They were found just off of Interstate 15.

February 4th of 2010 was when the family disappeared. No one saw the family or heard anything from them past that day. They were apparently reported missing, because police entered the home to look for them on February 4th, 2010. They had food left out as if they had left in a hurry. They had also left behind two dogs. The McStays were residents of Fallbrook which is about fifty miles from San Diego. Their car was found near the border, and police had surveillance footage of the family entering Mexico. Police worked with the FBI on the case. Authorities say that there was evidence someone researched visiting Mexico at the home, but the family’s credit cards and bank accounts were never used.