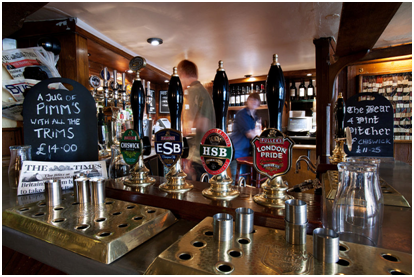 Straight from the Bottle is Not the Way to Go

We all know that swigging straight from the bottle gives off an aura of coolness but it isn’t ideal for drinking beer, or much else for that matter. Tasting anything is predominantly a nasal endeavour – we taste only because we can smell. Drinking from the bottle removes your nose from the situation almost entirely, eliminating some of beer’s finest features.

The Colour of the Bottle is Vital

Seeing as the ‘King of Beers’ Budweiser is, according to LostRemote, America’s favourite beer, then the thickness and colour of the bottle must be of great importance. An edgy green or a sensuous blue sitting in commercial bottle coolers will do more for the eye but the fact of the matter is that, generally, the darker the bottle, the better kept your beer. Lighter-coloured bottles will allow far more sunlight to hit your precious brew, ruining its taste in the process.

Although seeing beer taken straight from the chiller and poured slowly into a cold, frosty glass on a blistering summer’s day is perhaps one of the best sights in human existence, in order to actually enjoy beer at its finest, beer should be served at an optimal temperature. At 44 degrees Fahrenheit, beer is at its greatest as your taste buds haven’t been chilled into a sensory numbness. It might not look as appealing in the midday heat, but its taste will more than make up for it.

The Darker the Beer, the Weightier

People often seem scared by the heftiness of dark beers, fearing that a single pint will throw your digestive system out of line and stop you eating for the rest of the month, but this is unfair. You might think that the light, bottled beers trapped in the coolers hidden below the bar – like those available at commercial bottle coolers from Fridge Freezer Direct – will be easier on the stomach, but in actuality there is very little difference. Most of the darker beers are only that colour because of how the malt is roasted in the production process.

So heed these warnings and enjoy the plethora of beverages on offer all around the world. Just make sure you optimise your (responsible) drinking experience by ignoring these beer myths.