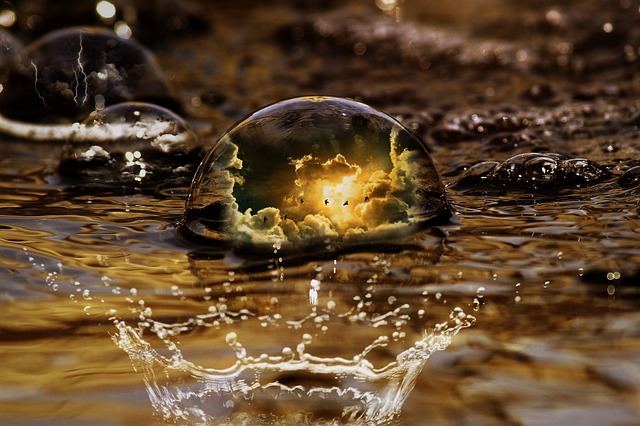 Over the years, solar energy has revolutionized the way people bring power into their homes. This reliable, renewable energy source is making huge strides across the globe. However, whilst impressive developments have been made in this area, one major concern is that these solar cells cannot produce their maximum power potential when it is raining heavily.

A team of researchers in Qingdao, China have recently come up with a clever solution to tackle this problem. They have developed an all-weather solar cell which can generate power not only with sunlight, but with raindrops as well. This new invention is covered by a thin layer of graphene, which is characterized by its remarkable electronic properties. It is high in conductivity and has an excessive amount of electrons which can freely move across its surface. In instances where water in present, graphene combines with positively charged ions – this is known as the Lewis-acid base interaction.

Rainwater is not pure and contains compounds such as ammonium, calcium and sodium that disassociate into positive and negative ions. Therefore, rain water at the point of contact with the graphene surface will become enriched with positively charged ions and the graphene becomes equally enriched with delocalized ions, resulting in a dual layer made of positive ions and electrons and creates what researchers call a “pseudocapacitor”. The energy difference between these two layers is so distinct that it manages to generate electricity.

For the experiment, the researchers used a dye-sensitive solar cell and added a thin layer of graphene to its surface. It was then placed on a transparent backing of plastic and indium tin oxide. As a result, the all-weather solar cell was then equipped to produce electricity using both sunlight and salty water to simulate rain. The team was able to produce a respectable 6.5 percent energy conversion from their customized solar cell (by contrast, the best solar panels on the market run at approximately 20% conversion).

The experiment is still in its testing phase, so there is a large amount of work to be done to perfect this concept, but the researchers do hope that their work can assist in the design of all-weather solar cells in the future and ultimately help by growing interest in the development of renewable energy sources.

Currently they are working on finding ways that the technology can handle the variety of different ions found in rain water and figuring out how to produce enough electricity from the low concentrations they typically come in.

If these researchers manage to perfect this technology, they could change the entire future of renewable energy.