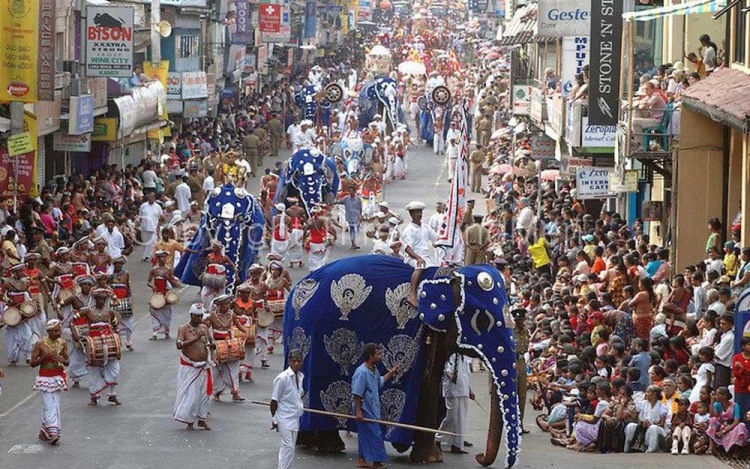 Indescribable! This is what you will answer to all the people who ask you what the Perahera Festival is like after traveling to Sri Lanka. It is practically impossible to describe in words everything that happens in this popular festival that brings together jugglers, musicians, dancers, fire-throwers and even elephants that dress their best clothes and costumes of the highest quality to celebrate a spectacular parade, considered by many of the most impressive of the Asian continent and even the world. 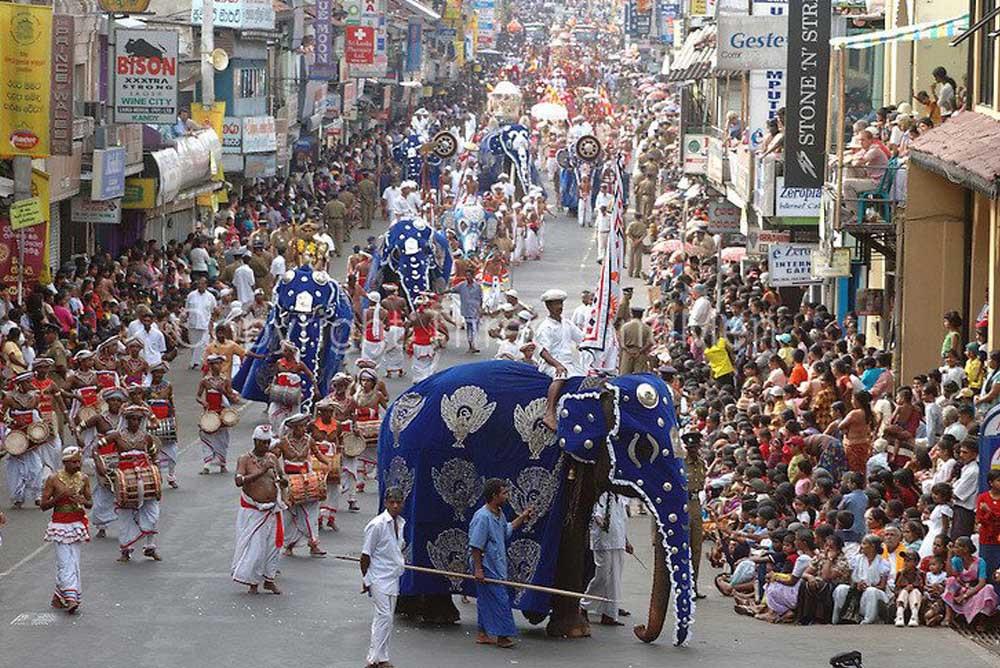 A Festival in Honor of the Tooth of Buddha

The Perahera Festival is celebrated in the city of Kandy, the last capital of the age of the ancient kings of Sri Lanka that is located in the middle of the hills of a plateau that crosses an area of ​​tropical plantations, mostly of tea.

The reason for the celebration is to pay tribute to the relic of Buddha’s sacred tooth and to the four guardian gods: Natha, Vishnu, goddess Kataragama and Pattini. Although in reality, according to the experts, it is the result of the fusion of this ceremony with another much older ritual that was carried out with the aim of asking the gods for rain for the harvests, whose origin is believed to go back to 300 BC.

Surely you are asking yourself a Buddha’s tooth? What does a Buddha tooth do in Sri Lanka? You will see when Buddha died, Siddhartha Gautama, the ascetic based on whose teachings Buddhism was founded, his body was incinerated, but some parts were saved from cremation and moved to different places on the planet, where different temples were created to venerate these relics.

One of those parts of the Buddha’s body that survived the cremation and its subsequent transfer is one of his teeth, specifically the left canine. According to the legend, Prince Danta and Princess Hemamala managed to move this relic from India to Sri Lanka in the 4th century BC, hiding it in the princess’ hairstyle.

Once safe in Sri Lanka, and after many swings, the rulers of the island decided to build a temple to safeguard the relic, the Sri Dalada Maligawa, “Temple of the Tooth”, located in the holy city of Kandy, in the center of the island.

For many years the Buddha’s tooth remained hidden, only the king could observe the relic, however, in the eighteenth century the king of Kandy, Kirthi Sri Rajasinghe, exhibited it to the population through a small parade. This tradition has been repeated year after year, with a procession in which Buddha’s tooth takes to the streets of Kandy.

‘Perahera’ in Sinhalese means parade of musicians, dancers, singers, acrobats and other artists. And the truth is that this festival lives up to its name because it is a multitudinous event in which music, dances, fire, smells and colors seem to flood all the streets of this city of Sri Lanka.

The crack of the whips from the beginning to the end of the road warns of the proximity of the procession, which begins with the flag bearers who carry the flags of the different provinces and temples, followed by the drummers accompanied by traditional dancers who create magic with their jumps and movements.

Shortly after the elephants arrive, on one of them, in the Maligawa, the most elegant dressed with silks of first quality, the Buddha’s tooth is kept, which is transported on a canopy and in a chest that guarantees its safety.

It is estimated that every year almost one million people travel to Kandy to pay tribute to Buddha’s tooth, but also to enjoy the hundreds of traditional dancers, drums and elaborate dresses, as well as the parade with more than 100 majestic elephants.

The exact date of the festival changes every year depending on the moon, but usually takes place between July and August, when the first teaching given by Buddha after reaching enlightenment is commemorated. The Perahera Festival lasts ten days, with numerous parades and activities.

So if you plan to travel to Sri Lanka, we advise you to coincide your trip with this festival that this year will take place between August 17 and 27. It is a great experience in which you will immerse yourself fully in the Buddhist culture, understanding better all its traditions.

If you dare, consult the program of our organized trips the best of Sri Lanka summer or Sri Lanka and Maldives, which include a day at the Perahera festival in Kandy.

Cross this country from your list of a new destinations, and visit Sri Lanka at the time when the Perahera festival is held to carry out a journey not only physical, but also sensory, traveling through the senses to another era. You will believe until you are in another world.