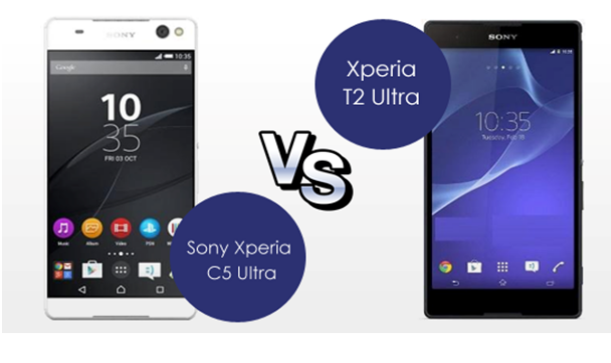 Sony’s big screen smartphone series has taken the sway of phablets to a whole new level.The company launched a bunch of smartphones last year, but this time around everything has been quiet since the launch of Xperia Z3+. We all know Sony brings the best of everything and this time, before introducing the first-of-its kind Xperia Z5 Premium with a 4k UHD display, the company unveileda crafty mid-range phone for big-screen lovers, Xperia C5 Ultra. The latest member of XperiaC family brings the best of Android with stunning looks and prolific camera capabilities. The device is currently hitting the shelves across countries, but because of its humongous 6-inch display, many buyers are comparing it with Sony’s another big-screen phablet, Xperia T2 Ultra.

Well, they both look closely related, but since our readers asked for it, we’ll be highlighting some major elements which draw a clear line between the two smartphones. Have a look to know more!

Smartphones from Sony have always looked majestic, and Xperia C5 Ultra and T2 Ultra are also no different. The new Xperia C5 Ultra has been designed on the basis of Sony’s OmniBalance design concept, and is held up tightly in a metal chassis. The back of the device features glass and the metal strong chassis protrudes over this glass for adding further protection against unexpected accidents. It comes in Black, White, and Mint colors, weighs around 187 grams, and tips on the scale at a decent 8.2mm.

Xperia T2 Ultra, on the other end, features a decent look and is almost identical in size. It neither boasts OmniBalance design nor a metal chassis, but is still good enough to cater standard requirements with complete perfection. The rear-panel of this device has been crafted from glossy plastic and is susceptible to fingerprints and scratches. But on whole, the feels pretty slick and compact, and gives great feel with rubberized edges. Compared to C5 Ultra, its slightly slimmer and lighter as well.

Both mid-range beauties offer a vivid visual experience with their large 6-inch displays, powered by Mobile BRAVIA Engine 2. They both produce crisp colors and ideal contrasts, but when you’ll go into details, Xperia C5 Ultra will look much stronger than T2 Ultra. The sensational phablet from Sony boasts a bezel-display with a resolution of1080 x 1920 pixels. It features more pixels per inch, and certainly looks better than the HD Triluminos display featured on Xperia T2 Ultra.

As for hardware, Xperia T2 Ultra is powered by a quad-core Snapdragon 400 processor clocked at 1.4GHz, coupled with 1GB RAM and Adreno 305 GPU. It was a big hit last year, but as of now, its specs look quite outdated for a mid-range smartphone.At the first place, it can handle standard usage without any glitches, but for heavy users, it’s nothing but a piece of crap!

Sony Xperia C5 Ultra, on the other side, has been crafted specifically to deliver best-viewing experience with snag-free performance. The device features immense power, and is equipped withMediaTek MT6752 SoCwith eight cores clocked at 1.7GHz, coupled with 2GB RAM and Mali-T760MP2 GPU.The performance of this smartphone is fairly impressive and much better than the degenerated T2 Ultra.

On the software front, there is nothing to compare. Xperia T2 Ultra and C5 Ultra both run the latest iteration of Android with a bunch of apps from Sony. While C5 Ultra runs Android 5.0 right out-of-the box, its counterpart, T2 Ultra runs Android 4.3 Jelly Bean out-of-the box, and offers upgradability to Android 5.1 Lollipop. For a long time, T2 Ultra ran on Android 4.4.2 KitKat, but as Sony promised, it has started receiving Lollipop update in different regions.

Xperia C5 Ultra and T2 Ultra feature the same 13-megapixel shooter for clicking ideal snaps under lowlight and daylight conditions.They boast a bunch of features, and deliver excellent images up to a maximum resolution of 4128 x 3096 pixels. The camera performance of the two smartphones is very good, and on the plus side, they can also capture videos up to a maximum resolution of 1080p at 30 frames per second.

The front-camera, however, is the biggest element of difference between the two phones. Xperia T2 Ultra features a decent 1.1-megapixel front-facing snapper, while the new C5 Ultra createsa perfect ecosystem for selfie enthusiasts with its whooping 13-megapixel shooter. The handset comes with a LED flash on both ends and gives an ideal photography experience with excellent shutter speed.

Along with camera efficiency, inbuilt storage also marks a difference between T2 Ultra and C5 Ultra.The Xperia T2 Ultra has been equipped with 8GB of inbuilt storage, expandable up to a maximum 32GB via micro-SD card.It looks pretty good for standard users, but again, C5 Ultra takes the game away by offering 16GB on-board storage, with expansion up to 200GB.

On comparing battery capabilities, the older sibling looks stronger with its 3000mAh battery. Xperia C5 Ultra houses a smaller 2,930mAh battery, but can easily hold sufficient amount of charge throughout the day.Therefore, in our opinion, It’s just a minor difference of battery capacity which will not come into notice while either of the two handsets.With Lollipop coming on T2 Ultra, upgraded STAMINA mode will also play a significant part in increasing its battery backup.

Not long ago, Sony announced C5 Ultra ata hefty Rs. 29,990. The device will get some price-cuts within a month or two, but as of now, it’s a whole lot expensive than T2 Ultra rolling at the best of Rs. 17,000. Both smartphones are available online and offline, and can be purchased via Sony outlets as well.

Sony Xperia C5 Ultra and T2 Ultra definitely look closely related, but from inside, they both go in different directions. While T2 Ultra offers mid-range smartphone experience at a low-price tag, Xperia C5 Ultra packs more power and comes at a heavy price value. They both sit perfectly at their places, but still, slight price cuts from Sony will make them better for Indian buyers.