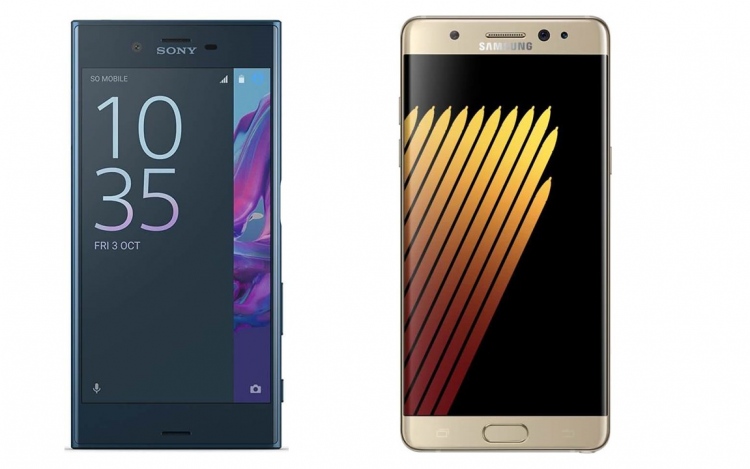 Sony and Samsung has been giants of the smartphone industry for a long long time now. Though Sony seems to have shot down a notch with several other relatively new Chinese smartphones taking up a major portion of the smartphone market. The Sony Xperia XZ is a premium offering from the house of Sony to heat up the market and recreate the magic it was once known for. However with the Korean giant Samsung’s latest offering, which is albeit the Galaxy Note 7, will it stand a chance? Let us find out.

The Sony Xperia XZ showcases a 5.2-inch full HD IPS display that has pixel density of 424ppi with a layer of Corning Gorilla Glass v4 on top for defending against cracks and scratches. The smartphone runs on Android v6.0 (Marshmallow) operating system. The Samsung Galaxy Note 7 flaunts a 5.7-inch large super AMOLED display. The screen has a QHD resolution (1,440 x 2,560 pixels) and a pixel density of 515ppi, which produces great quality visuals. The screen is protected by Corning Gorilla Glass v5 on the top. This is the first device in the Galaxy Note series that comes with dual-curved edges.

The Sony Xperia XZ device comes fitted with a 23MP camera on the back and 13MP camera on the front. The handset comes loaded with advanced photography technologies, it has triple image sensing technology to analyse, adapt and capture perfect shots in various conditions. This includes an image sensor that predicts movement for keeping objects in focus, a laser autofocus that measures distances to the object for delivering sharp images and an RGBC-IR sensor that Measures visible colour and IR info to adjust white balance and capture naturally vibrant colours.

The Samsung Note 7 features a 12MP main camera having an aperture of f/1.7 and features like optical image stabilization, autofocus and an LED flash. It also comes with a 5MP front camera to take selfies and videos.  The Galaxy Note 7  manages to capture bright and clear images indoors as well as outdoors and even under low-light conditions. Selfies are great thanks to the display which lights up as a flash in darkness. There are several other filters and editing features, as well as shortcuts to make your photography experience interesting. The camera interface is also packed with lots of improvisations for a better use. The phablet has an internal memory of 64GB and and can support microSD cards of up to 256GB.

For storing your data, The Xperia XZ comes with 32GB of internal storage while the internal memory of Galaxy Note 7 is 64GB. Both can be expanded upto 256GB using a microSD card.

The device features 12MP main camera having aperture of f/1.7 and features like optical image stabilization, autofocus and LED flash. It also comes with a 5MP front camera of selfies and video calls. The phablet has an internal memory of 64GB and and can support microSD card of up to 256GB.

Connectivity options available on the Xperia XZ are 4G, dual band Wi-Fi, hotspot tethering, Bluetooth v4.2, GPS, NFC and USB Type C. With regards to sensors, the ones that are present in this phone are light, proximity, accelerometer along with fingerprint sensor on the front.

The Samsung Galaxy Note 7 also offers a wide range of connectivity options that are dual SIM, 4G, Wi-Fi  802.11, a/b/g/n/ac 5GHz, hotspot tethering, Bluetooth 4.2, NFC, GPS and USB Type C. It also contains an iris scanner, becoming one of first smartphones to have one. Its presence boosts the biometric authentication feature of this device. Other sensors present in this phone include a heart rate monitor,accelerometer, barometer, compass, gyroscope, proximity and light sensor. It comes with fingerprint sensor on the front as well.

Both the smartphones seem to have great features, but when it comes to deciding which one you should opt for, the Galaxy Note 7 ends up at the tip of your tongue. Though the camera of the Xperia seems to be better on pen and paper, we all know Sony has failed to incorporate the magic of its standard cameras on its smartphones lately. The Note 7 also stands tall on performance and build quality. It seems to have everything that the Xperia XZ has and even more. The added advantage being a stylus. But with the last batch of the Galaxy Note 7 bursting, Samsung still aint sure if they will be re-releasing the phone once again, if that happens, then you can definitely go for Sony’s Xperia XZ.