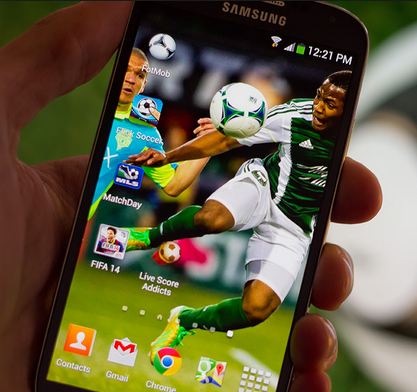 If you can’t make it to the game, why not bring the game to you on your iPhone? Most of the apps we list below will let you access not just the game but videos, news, and more content.

If you follow the top soccer league in North America, Major League Soccer, then this app is simply essential. You get high-definition live streams of games in the league, that is every game except the games which NBC and ESPN have blacked out for broadcast nationwide. You also get live data from Opta, news about soccer around the world and in the US, and of course scores.

The app was updated a little while back with better personalization features too, enabling you to filter out the content by story type and team. You don’t just get live video, you also get stats, lineups, and more.

Video is king at ESPN, and this app is no exception. For world cup qualifiers worldwide, this is the app to use. It also offers games in European domestic leagues. Of course the ESPN app’s soccer module is just a small part of what it offers, but it still has a truly impressive list of live games worldwide, including live feeds from the ESPN network family.

Which live content you can access is however set by your cable TV company — currently there are eight participating — or the Internet Service Provider you use, so check whether you qualify.

You probably don’t think of Twitter as a “soccer” app, but every day sees it become more and more crucial for the serious soccer fan. You get news and views daily, unfiltered, and live from the source — experts, players, and fans alike. It will help if you speak languages besides English, since soccer is the “world’s game” and commentary hapens in many languages. Regardless, this app is overall the best place to start.

One of the newer apps, this app is the product of Ohio State University computer engineering professor Hesham El Gamal. As an Egyptian native and CEO of Inmobly, he first put it out in the Middle East. Now it’s soccer-crazed Egypt’s number-one sports app.

The idea behind inFootball is that it’s one-stop shopping for aggregated video, live scores, and news, from a selection of 18 different news sources that you can customize — think ESPN, FIFA.com, CNN, the New York Times, Fox Sports, the Premier League — and covering the world’s top leagues. It downloads content over either 3G or WiFi so you can read or consume it later. The interface is uncluttered and innovate, and you get short synopses of news stores that you click on to visit the relevant website.