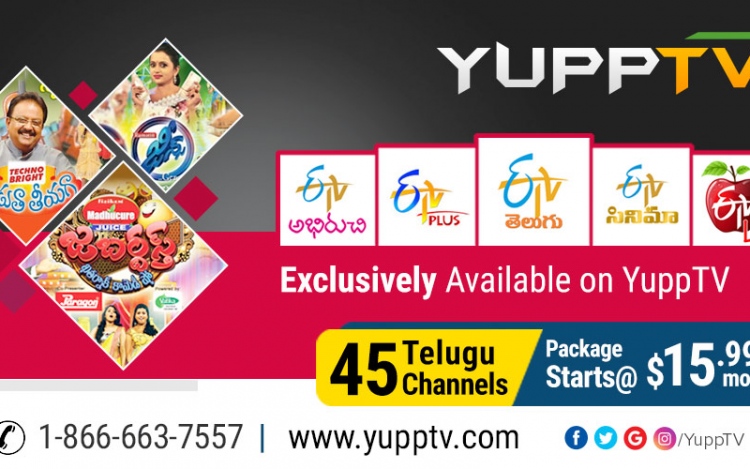 Moving to a new country comes with many adjustments. One of the changes includes not having access to some of your favorite local channels. Most people resort to looking for those channels over the internet, but the process can be draining. Indians in the USA have had problems in accessing ETV Telugu Channels in the recent past. But I’m here with good news. YuppTV has done a tremendous job by launching the most popular and prestigious Telugu Channel ETV for Indians in USA.

Telugu people are part of the Indian Community. It is estimated that about 250,000 Telugu people live in the US. They speak the Telugu language which is mostly spoken by people living in South India. The USA hosts a large number of Telugu people, and for the longest time, they were not able to access their local channels. With the new adjustments in place, YuppTV will air ETV Telugu Live, ETV Plus Live, ETV Cinema Live, ETV Life Live, ETV Abhiruchi Live.

ETV is one of the most sought after channels included in the Telugu package. TV viewers in the US will now have the benefit of watching comprehensive coverage on current affairs. The Telugu Package covers almost all the channels aired in India. The channels have a big following by the Telugu people. With these channels, viewers will have access to soaps, drama, comedy, Live TV News, and documentaries.

Telugu people are residing in the US will be completely updated with any key coverage, news bulletins or entertainment. YuppTV now becomes the most dominant provider of Telugu Channels in the USA.

It also provides live streaming services. With a simple internet connection, viewers can access content from wherever they are. The service can be aired on Android devices, PC’s, Laptops, Smart TV’s etc. All that one has to do is to download the YuppTV app and access the content.

It has managed to perform and deliver world class standards in providing content. The Channel airs more than 250 Indian television channels and in 14 languages. The languages include Hindi, Bengali, Tamil, Punjabi, Telugu, Kannada, Oriya, Marathi, Bhojpuri, and Malayalam.

The launch of the ETV Telugu channels is a big gift for Telugu expats in USA. Now everyone can watch their favorite Telugu programs anytime, anywhere. Cinema lovers can watch the Telugu movies 24X7 on ETV cinema live and foodies can learn delicious dishes by watching ETV Abhiruchi live.