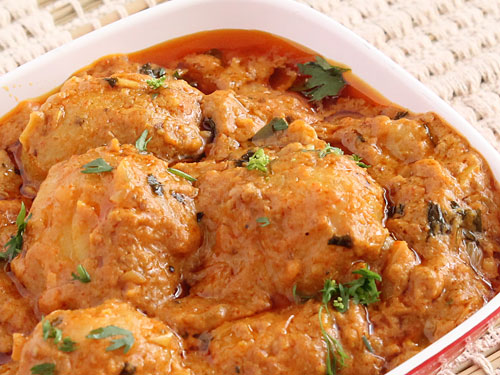 Unless you’re very familiar with Indian cooking methods, you not have heard of ‘dumpukth’, a steam method that’s said to be a particular favourite with the Indian royal family – and if it’s good enough for them, it’s good enough for the rest of us. Dum cooking creates a host of exciting aromas and flavours that have to be tasted to be believed.

Otherwise known as “the food of the nawabs,”Dum pukth, was introduced to India by the Moghuls, who came over from the Middle East – which is why it has become synonymous with royalty. It was originally used in Awadh, but it soon caught on in the royal courts of other regions –especially Khasmir, Hyperabad and central India.

As tends to happen in Indian cooking, each region brought its own influences to the technique, and methods began varying slightly between each kitchen. In fact, cooks often got competitive about who had the winning formula!

The word ‘dum’ translates from Hindi language literally as ‘taking in air.’ Though it was first used in India more than two centuries ago, it is still an incredibly popular way of cooking and has become something of an art form that holds a special place in many people’s hearts. Different types of cooks, from street vendors to smart urban restaurants, use the dum method to create a range of hearty and delicious dishes.

Essentially, the dum cooking method allows the ingredients to cook for a long time in their own juices over a very low heat. This method of cooking retains the moisture in the dish and preserves the precious nutrients within the meat, vegetables and rice. These ingredients, along with ghee, herbs and fresh spices (although less spicing is used than in other Indian cooking methods) are added to a copper or earthen pot, before being topped with a flavoured, puff-pastry-like dough made from flour, sugar and ghee. This is sealed and then cooked over a low flame.

The ‘grand-breaking’ of this seal is said to release a wonderfully heady and aromatic fragrance that can be detected from up to a mile away!

One dish that perfectly demonstrates the dum cooking technique is the Hyderabadi Biryani. What makes it so distinctive is that it’s cooked in an airtight pot – the lid isn’t always made of dough, but the finished dish is much better if it is. The two different variations of Hyderabadi Biryani are kacha (raw) and pakki (cooked); both are cooked using the dum method.

In the UK, it’s hard to find many Indian restaurants or curry houses that use the age-old dum cooking method. If you really want to give this unique experience a try and can’t make it to India, you’ll have to head to one of London’s top fine-dining Indian restaurants instead; here, regional chefs make dum cooking a speciality, as well as a host of other traditional cooking techniques that create the distinctive flavours of Indian cuisine. So, you can dine like Indian royalty right here in the UK.