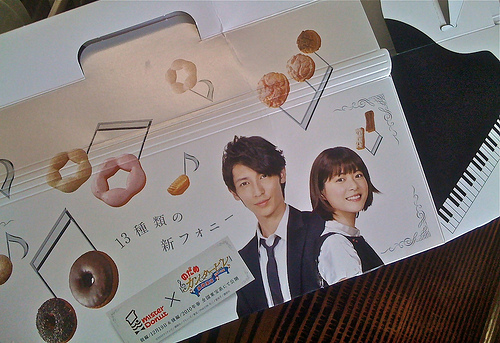 When recorded media first hit the market, it was stored on vinyl platters and encased in plain brown paper wrappings. Since all of them looked the same, record stores were set up to sell to informed buyers. They came into the store and asked for the recording by name. There wasn’t much browsing back then.

Columbia records hired a young 23-year-old art director in 1938 named Alex Steinweiss. He approached the executive officers at the record label and suggested a new way to showcase the sounds. His simple idea revolutionized the industry and the creative packaging of music was born.

Rogers and Hammerstein were a wildly popular American musical theater writing team. When Steinweiss heard their music, he saw Broadway. His first album cover was completed in 1939 and featured illustrations with a strong European influence. Other record companies saw the potential and soon began illustrating album covers as well.

The young art director said, “I wanted people to look at the artwork and hear the music.” Once illustrations were included in media packages, overall record sales increased by a stunning 800%. There was no looking back and the art form continued to evolve.

Media packaging has both reflected and spur social change. Advances in photography made during the 1950s changed the emphasis from illustrations to photos of the artists themselves. The Chantel’s first album was graced with a picture of the four female African American women who made such joyful music. Unfortunately, the America of the Fifties wasn’t ready for this and record executives changed the cover to a photo of two white teenagers and a jukebox when the album began to climb the charts.

Not all record companies were afraid of rocking the boat with their covers of the rising rock ‘n roll artists. Blue Note, Specialty, and Motown celebrated their black artists and used the album covers to bolster the efforts of the strengthening civil rights movement. For the first time, black artists were receiving their due.

Blue Note designer Reid Miles worked in the 1950s and 1960s. He got the back story on the groups and created artwork that reflected a total picture. His aim was to reflect on the musical moods and meanings of the music and represented a departure from the more widely used commercial images.

Media Packaging: Art In Its Own Right

Social Media encompasses a wide array of mediumsWhen The Beatles released the Sgt. Pepper album in 1967, they blew the lid off the industry. The Number One album of all time, its cover was resplendent with color and design. Designers went a step further and for the first time included song lyrics on the inner sleeve. Critics hailed the album cover as a work of art that could stand on its own.

While Sgt. Pepper marked a turning point in the industry, it was not the first time that covers had been created by working artists. Salvadore Dali crafted the cover for songster Jackie Gleason’s Lonesome Echo in 1955. His international reputation as an artist lent legitimacy to future undertakings. Famed artist Andy Warhol worked on the Rolling Stones Sticky Fingers 1967 cover; H.R, Giger handled Debbie Harry’s 1981 KooKoo; and more recently Damien Hurst did art for The Hours.

The Future Of Media Packaging

Custom media packaging continues to reflect the musicians, the music, and the world that we live in. More and more people are buying vinyl records just to get the larger scale artwork that comes with it, However, the industry is also providing some interesting solutions in CD packaging. The cover is small but many include special inserts that feature lyrics, history, and a variety of illustrations. In fact, the CDs themselves provide an interesting medium for stunning artwork as well.

Amy Rice writes about the future of media packaging, when not writing she enjoys playing adventure golf.