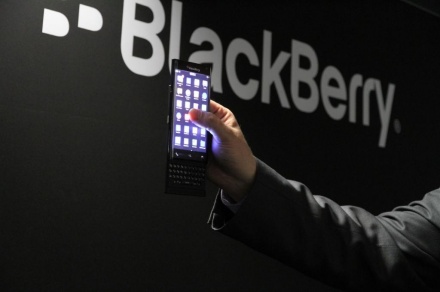 The BlackBerry Venice is one of the most anticipated smartphones of the year, and company’s first Android device, Now leaked photo from BerryFlow. A dual Edge curved screen similar to the Galaxy S6 Edge. It would seem that the device has been spotted at the Toronto Film Festival.

BlackBerry Venice will be a smartphone with a sliding front and a physical keyboard. In the photo we distinguish that the top of the front panel. It seems that the model is encased in a shell and that the displayed application presents a Material Design interface, perhaps the new messaging Stock Android, but nothing is less certain. The BlackBerry Venice will be a real high-end able to compete with flagship stores of the moment.

For the rest of the phone, the questions always arise, it seems that its camera sensor is 18 megapixels with an optical stabilizer double LED flash. The BlackBerry Venice is not official, this picture has obviously not been confirmed, however, the smartphone design overlaps well with the previous visuals we had seen.

To recap, of technical specifications, it seems that a thin metal edge now takes place on the top of the unit. The rest is expected to sports a 5.2 inch screen with qHD resolution (2560 by 1440 pixels), the BlackBerry Venice will run with a Snapdragon 808 coupled with  3 GB of RAM and 5 megapixel front sensor. This sheet is a little summary for now, but should quickly expand, The release date of this BlackBerry Venice is scheduled for November. But November is approaching and the arrival of BlackBerry Venice still seems imminent. And for good reason: its Venice, we hope to see formalized by fall, And it will run with Android operating system and not with the BlackBerry 10.