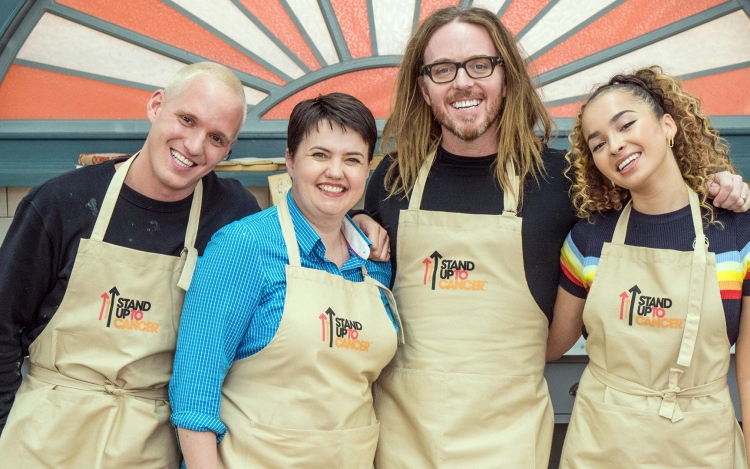 It’s not quite British TV’s most hotly anticipated moment – that would be a new series of Bake Off launching. But the return of the Celebrity Bake Off, this year supporting Stand Up 2 Cancer, is almost as good as the real thing – and the good news is that it’s back right now!

Instead of a tent full of keen amateur bakers who’ve practiced their bakes to perfection, we get a marquee full of slapdash celebrity bakers. It’s not quite got the technical skill that we’ve come to expect from the regular programme, but the giggles more than make up for it.

This year the line-up sees chat show host Alan Carr go head-to-head with comedian Aisling Bea and athlete Kadeena Cox. Made in Chelsea’s Jamie Laing also puts in an appearance, to make what Paul Hollywood has described as the worst cake ever made on the Bake Off. That’s some achievement!

While on the regular series, bakers must meet a minimum standard in order to even get on the show, no such standard applies for celebrities. That makes for an entertainingly wide range of abilities, from the giftedly brilliant to the truly terrible. The stakes are lower, too, for celebrities, meaning that silliness ensues on the celebrity Bake Off shows in a way that it can’t with amateurs.

A total of five special episodes will see 20 celebrities competing for the chance to be crowned Star Baker, with all of the funds raised by viewers going to charities helping people with cancer.

If you’re planning an event for an audience that loves GBBO (and let’s be honest, who doesn’t) then booking Paul Hollywood as a celebrity guest could be an inspired move. Available to book through entertainment agencies for cooking demos, talks and appearances, he’s sure to prove a real draw.