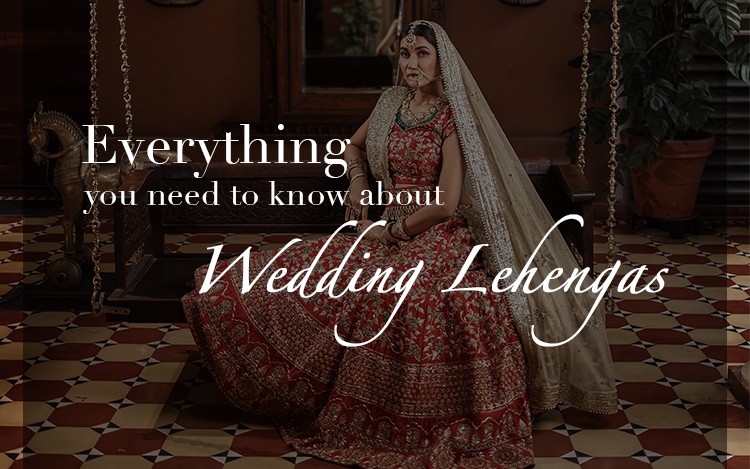 Did you know your favorite designer ethnic lehenga choli is having interesting off-screen facts? Designer lehenga choli is coming from the past era as the royal outfit. In the modern era, lehenga choli becomes the most elegant wedding outfit among the Indian Subcontinent. Let’s try to understand the history behind lehenga choli.

Indian Wedding clusters are becoming more and more stylish and stunning nowadays. Especially Chaniya Choli is the lovely and glamorous cluster. Lehenga Choli is the most worn outfit in the South Asia Continent. Whether it is a wedding, an engagement, a festival, or other occasions, Lehenga is the evergreen costume style among women. Look at this hypothetical story behind your loving Lehenga Choli.

The Story so Far of Indian Lehenga Cholis:

Ghaghara Choli is the outfit wearing with 3 clothes. But the point is that how did people think of Lehenga Choli? We all know that the people of the ancient era did not have any sense. They wore leaves of the tree, they ate meat, and they lived in caves. The time gone, they build a sense, humanity took place, they enhanced emotions level, their brain started giving signals, they started growing food, they started woven clothes, they started cultivation.

After a time, they started wearing clothes to protect their body from the seasons. Because of having emotions, they needed to wear clothes that hide their body parts from other people. They developed clothing called Ghaghra (also called – Skirt) worn with Kurti. It may possible that with time, they thought to cut the length of Kurti to give it a new pattern. The new pattern outfit was named given a Choli – which was having short or long sleeves and off-shoulders. They started to wear Choli with knee-length Skirts and Long Skirt and Dupatta – also known as Uttariya – worn over a shoulder.

It’s Important to Know That What Lehenga Choli is?

Lehenga Choli is the aesthetic blend of traditional Saree and Skirt – often pronoun as Lacha or Lehenga to give a royal look to Lehenga Choli. In this sense, the three core clothes of Ghaghra Choli are as follows:

Lehenga: Lehenga means a long skirt that is simple by look, but has elegant embroideries to give a gorgeous look. The lehenga was called the ‘Antriya’ in the Hindu community. Other names of Lehenga are Ghaghara and Chaniya.

Choli: Choli is the type of outfit worn by Lehenga. It means Lehenga was worn at lower, and Choli was an upper outfit. Choli was worn as a chest band. Nowadays Choli simply means to Blouse or off-shoulder blouse.

Dupatta: Dupatta was worn over a shoulder to give a stylish look to Lehenga Choli. In the past era, it was known as ‘Uttariya’. Dupatta can be called Chunni or necktie. There is no single way to style a Dupatta with Lehenga Choli.

Trend of Lehenga Choli in India:

It is not enough details about our first-chosen outfit – Lehenga Choli. Here, the question is that why how Bridal Lehenga becomes too much popular in India? Who brought Lehenga Choli to India? In the 10th Century, the arrival of Mughals and other Islamic communities was started in the major provinces of India. The royal women of Islamic rulers wore outfits having three clothes and that have elegant and attractive patterns. Lehenga Choli was the outfit of the Rajputs royal family too. They used to call it “Patka” or Antariya. Mughals were brilliant among all the foreigner rulers who rein India. They always walked a step ahead in the military, revenue reforms, architecture, and literature. This way, they were also fashion designers. Mughals have added value to the Indian attire fashion in the 14th century and started a new trend of Lehenga Choli which is remarkable in Indian History.

By going continental, Lehenga Choli is the common wearing outfit in India, Nepal, Bhutan, Bangladesh, Shree Lanka, and Pakistani provinces – Sindh and Punjab. In the Indian Continent – Gujarat, Rajasthan, Punjab, Madhya Pradesh, Bihar, Chhattisgarh, and Maharashtra are the major provinces wearing a Lehenga Choli to spark beauty and personality. Lehenga Choli is the perfect apparel for a Bride on her wedding day to make it memorable and glorious.

As time-lapse, modern fashion designers started developing their creativity to give a modern traditional look to the Lehenga Choli. Initiative fashion trend changed by the experienced people has created sherwani and wedding lehenga has groom and bride outfits for his big day. New variations are finely given to the Lehenga Choli, a stepped Uttariya becoming more elegant with varieties of embroideries and patterns. Foreigners left their spark in fashion trends in India. Indian fashion designers created Lehenga Choli by binding the crafts of India and abroad countries. Below you will know that how many types of embroideries give a gorgeous look to Lehenga Choli.

The word Sequin comes from the Arabic word “Sikka” – means ‘a coin’. Later became the Venetian word ‘Zecchio’. After that in the 16th century, it morphed into the French word – “Sequin”. As the name, the pattern drives a pretty look to Lehenga Choli by embellishing a polish around a little disc metal and sewed together on the fabric. It’s very tough to sew disc metals on the fabric and it requires a lot of time and effort. As a result, the Sequin Lehenga is becoming the second name of charm and elegance.

So many items are made from Leather nowadays. Belts, wallets, shoes, slippers, mobile covers, and many more are made from leather. Fashion industrialists also thought to give a new variant to the designer Lehenga Choli to make it very special and can be wearable for a Bride. Simply by cutting leather in the shape of Lehenga Choli and stitched with a silk or brocade fabric and hue the Lehenga binding Indian and Foreigner embroideries together. In the 21st century, Leather lehenga choli is the very famous style of Chaniya Choli as it is specially designed for modern Bridal attire. This type of Lehenga Choli is heavy, glamorous, and expensive.

Zardosi’s work looks ten times more royal and glorious when it becomes a part of Lehenga Choli. The trend of Zardoshi work sprouts as re-fashion over South Asia and West Asia continental countries. While going to the back of this beautiful embroidery, Zardoshi’s work is the type of Persian embroidery. Persia was a developed country during the medieval time of India and currently, the area of Persia is known as ‘Iran’. Zardoshi’s work can be crafted on silk fabric, and mostly georgette fabric is used while using Zardoshi’s work. Zardoshi’s Lehenga Choli sparks a positive aroma in your attire for a wedding.

Mainly, Lehenga Choli is the most worn outfit in Rajasthan. Rajasthani takes their clothing styles very seriously when it comes to Fashion. Eventually, they design new patterns and designs that make a Lehenga Choli very heavy-looking and the Royal family outfit. Here, the Gota Patti work originated from the province of Rajasthan. Small pieces of Zari ribbon are applied onto the fabric with the edges sewn down to elegant patterns on Lehenga Choli. Gota Patti’s work is extensively used in South Asian wedding clothes. It also takes a lot of time to craft on fabric and varnishing to make an exclusive Lehenga Choli for the Indian bride.

Bandhani also called ‘Bandhej’ is a very famous print among Gujarat and Rajasthan. Generally, no one can say no to Bandhani styles clothes, especially to Bandhani Lehenga Choli. Designing a Bandhani pattern requires hours of time and much patience. The word Bandhani comes from the Sanskrit word – ‘Bandh’ (means ‘to bind’ or ‘to tie’). Bandhani is a tie-dye textile decorated by plucking the cloth with fingernails into many tiny bindings. Bandhani Lehenga is the most beautiful outfit for you to wear at festivals and special occasions.

Mirror Lehenga often calls at mirror work Lehenga Choli. A Lehenga Choli outlined by designing a pieces mirror on the silk or georgette fabric and sewed Resham embroidery alongside the stuck mirror. The trend of mirror work in the fashion industry comes from the West Asian countries. Traced back to the 13th century, Persia started crafting mirror work on their Lehenga Choli. According to Islamic beliefs, a mirror helps to trap or blind the evil eye. Wearing a Lehenga with mirror work at weddings and special occasions is a sign of good luck. By going this, every Indian Wedding Attire contains a bit of mirror work as a sign of positivity and luck.

Ruffle means Layers. The term ‘ruffle’ belongs to the Indo Western. The royal Anglo women have worn the dress named – A Gown or a one-piece with having unique designs and outreaching western styles. The princess gown was designed with a layer to give an intense look to the clusters. Anglo came to India and influenced their styles over the Indian Sub-continent. They saw the Indian outfit Lehenga Choli and found it boring. They started binding the ruffled styles into the Lehenga Choli and it became the new design for the Indian people. In other words – the ruffled lehenga is the layered skirt with georgette fabric and elegant floral prints on the Lehenga Choli.

Resham work means thread work. 2500 years ago, it was the part of Chinese art done on the silk fabric with silk threads. China was the origin country for silk production. They started silk embroidery to give a much better look to their clothing styles. China gave a name, fame, and social standing to the silk fabric and silk work. Nowadays there is no single ethnic outfit designed without a silk fabric. By taking the idea of Resham work from China, India started evolving the embroidery with their Lehenga Choli. Resham’s work is used with the mirror work to give a stuck to the designer’s Wedding Lehenga Choli. The Kutch – province of Gujarat – was taken ideas from silk embroidery and added value to their society by starting embroidery with woolen on Lehenga Choli and Dupatta.

I hope you like the historical facts of your stylish Lehenga Choli and enjoyed the journey of Lehenga Choli. Indian Ethnic Fashion impacts a much worldwide when talking about wedding dresses, especially the Lehenga Choli. Shreeman has Lehenga Choli is having a huge collection with a variety of styles and patterns and elegant embroideries. Wear an elegant outfit to make your wedding and special occasions memorable and glamorous.