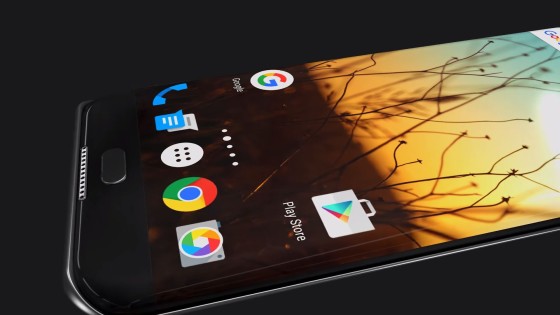 The Galaxy S7 Edge will be the next high-end smartphone from Samsung. Samsung reportedly plans to launch its missile early January 2016, probably at the CES, Samsung Galaxy S6 have made radical changes in terms of design phase. This year, changes have occurred with the use of glass / metal and according to a new report from G for Games, this will continue with the Galaxy S7. The rumors of recent days suggest that Samsung will use a unibody shell magnesium alloy.

Just like this year, Samsung will offer two versions of its well next flagship and one which sporting a classic form factor and the other one equipped with a curved screen on both side edges. The information confirmed, a few days ago by SamMobile and both models have already identified under the SM-930 and SM-935 serial numbers.

Galaxy S7 sports a screen of 5.2 inches Quad HD displays and for Galaxy S7 Edge sports a 5.7 inches Quad HD display with resolution 2560 x 1 400. Galaxy S7 Edge powered by the 820 Snapdragon processor, including Adreno 530 graphics coupled with 4GB of RAM while the Galaxy S7 comes with a Exynos M1 processor coupled with 4 GB of RAM. Qualcomm is working hard to improve the performance of its chip, Samsung seems ready to reconnect with Qualcomm for its flagship 2016. The Snapdragon 820 was benchmarked by GeekBench in July. At the time, the chip had obtained exactly 1732 points for single-core and 4970 points for multi-core. According SamMobile, Samsung finally managed to find a way to coexist UFS 2.0 and SD slot within the same device.

According to the latest leaked video, Also for connectivity to the Galaxy S7 Edge Type-C USB 3.0 port is placed on the bottom edge of the phone. 3.5mm headphone jack.

Galaxy S7 will apparently come with a magnesium alloy unibody design 6013 series, This year, Apple in turn incorporating aluminum 7000 series in the heart of its iPhone and 6S More 6S, so it is not surprising that his rival seeks to go even further. This concept looks really sleek.