Saving gorillas in the wild requires ongoing effort by gorilla conservationists. While much has already been achieved with regard to helping this endangered species, there is still much more that needs to be done. Issues such as habitat loss, hunting and poaching, military conflict and disease are currently the most common threats to gorillas in the wild. 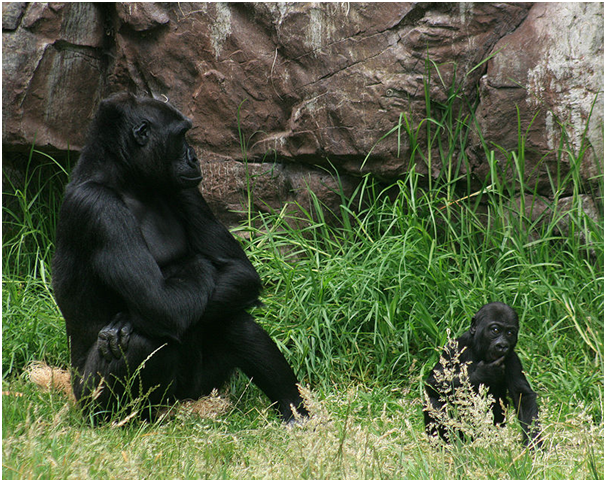 International organisations and local governments in Central Africa have been targeting these issues. There are further unique challenges to conserving the gorilla population, such as extremely low reproductive rates and the fact that they do not survive for very long in captivity.

Mountain gorillas are probably the most studied and famous of the species due to their rarity. They inhabit eastern Central Africa and the estimated population in the wild is around 620. It is believed that the action of conserving mountain gorillas would also conserve a huge number of other species that inhabit the same areas; for this reason, they are known as an ‘umbrella species’ and their conservation carries a huge responsibility for the whole community that inhabits the same rainforest as the gorillas.

Five national parks located in Uganda, Rwanda and the Democratic Republic of Congo allow the gorillas to roam freely in rainforest that won’t be cleared for agricultural reasons. They are protected from poaching by forest rangers, who sometimes risk their lives to protect them. Environment educational programmes have been introduced to the local communities and a veterinary programme provides emergency medical care for these gorillas, with the success of this leaning to a programme of preventative care. An ecotourism programme has been established, providing much-needed financial incentives for creating employment, conservation and securing decent incomes for local populations and essential future conservation programmes.

Creating a vibrant ecotourism in essential for conservation to be successful through jobs, income and awareness. Companies such as http://www.steppestravel.co.uk/uganda offer many different trips, including popular gorilla trekking holiday where you can enjoy these magical creatures in the wild.

By tackling poverty and social conditions in the local areas, gorilla conservation stands a chance of succeeding. By taking the two-fold approach of addressing human poverty and wildlife management, including improved veterinary programmes, it is believed that the threat faced by this endangered species could be eliminated for good.