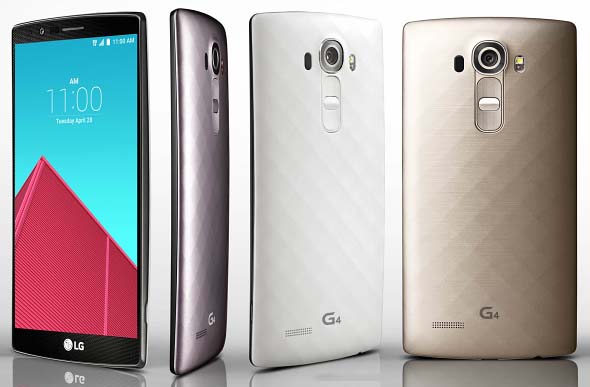 LG unveiled its flagship G4 smart phone at launch events in New York, The LG G4 is the first smartphone in the world to be equipped with a Snapdragon processor 808, instead of 810 Snapdragon like the LG G Flex 2, The HTC One M9 and Sony Xperia. It must be said that the new Galaxy S6 and Galaxy S6 Edge or the Galaxy S7 would have better processors. The Korean tech has placed the bar very high in success rate: a spectacular display, good battery life, and photos that place largely on the iPhone in this respect. The task promises to be difficult for LG, But the manufacturer has demonstrated repeatedly its ability to tell the difference. Focus on what we know, for now, on the LG G4.

Two Models to choose with a Plastic, another with Leather

The LG G4 is very similar to previous models. Its buttons are all well placed in the rear, interconnecting under the camera module. A module that comes with a dual LED flash, of course, but also this practice if laser autofocus in low light.

The finishes will depend on the model chosen. The basic version is equipped with a plastic shell available with a white, gold and gray. If you have the budget, you can direct you to the premium version and leather upholstery. Again, you can choose between several different colors: blue, green, brown and red.

The G4 and LG Quantum features an IPS screen of 5.5 inches. Its 5.5-inch screen will be slightly curved. The question is whether its contrast and brightness levels will be sufficient to worry the two high-end smartphones from Samsung.

The internal storage space rises to 32 GB and it will be perfectly possible to extend through a micro SD card.

It remains to mention the photo part. Pretty things again with a 16 mega pixel sensor topped with a stabilized optical able to open at f / 1.8. It should therefore be particularly efficient with the scene lighting conditions are not optimal. And f/2.0 8-megapixel front camera respectively., Of course. Added to the list of Wi-Fi 802.11 a, b, g, n, Ac / Bluetooth 4.1LE / NFC / USB 2.0, and a battery of 3000 mAh to top it off. A removable battery, no less.

The LG G4 will ship with Android 5.1 and the latest version of the overlay manufacturer. An overlay with an interface that showcases the Material Design course with very interesting bonus features. I think of this tool will match the icons and visual screen in a user-selected background, or even this function to capture an image in an instant and pressing the button on the back. The company hasn’t disclosed the price yet.