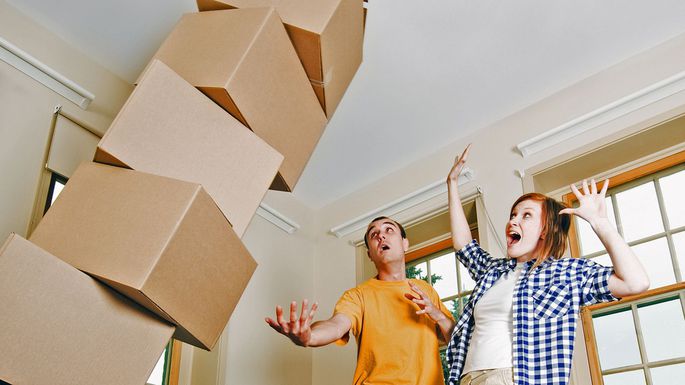 If you’ve ever had to relocate for work, school, or just to try someplace new, you know first hand how complicated moving can become. If you disagree with that statement and moving has always been easy breezy, you should buy a lottery ticket because you are lucky!

I’ve had my share of bad moving experiences but nothing like my friend Cameron and his family.

Cameron grew up in a home where they relocated often and learned that it was just easier not to accumulate too many personal items just for the fact of packing and unpacking or becoming overly attached to things only to have them lost, broken, or stolen.

Once Cameron grew up and had a family of his own he became quite comfortable in his job, community, and went against his philosophy of accumulating too much. He bought the biggest house on the block with a three car garage. That fact alone should give you a hint as to how much stuff he began collecting. Not only did he fill two of those garages with vehicles, but the third was storing a boat, six road bikes for him, his wife, and four children. If you ever wanted to have a fun adventure with all the toys included, you called Cameron.

One day, Cameron received news that his job was requiring that he relocate. Not just across town, but across the country! From West Coast to the East! This was a dramatic change and Cameron was dreading it.

He knew how difficult it would be to ship all of their belongings across country so he convinced his loving wife to have a garage sale before the moving truck came.

The spent an entire evening getting items ready for sale the next morning and went to bed. They woke up late to find the moving company had showed up a few days early and took it upon themselves to get the job done. Cameron and his family awoke to find all of their items they had left out for sale, missing!

To make a long story short, many hours later, Cameron learned that his items weren’t stollen but rather they were half way across the country. He called the moving company to have them turn around to return their items only to find out upon their return that more than half of their items were missing.

If you want to make sure your next move is easy breezy, make sure you work with the professionals at Safeway Moving & Storage. They understand that moving your treasured items is an important job and not one to take lightly.