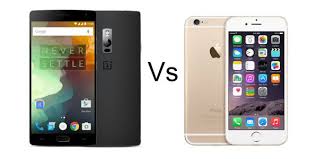 After tons of rumors and speculations, budget flagship of the year, OnePlus 2 is finally here! Packing an enticing set of specs, the self-proclaimed“2016 flagship killer” has already killed some big players in the smartphone industry.It had sky-high expectations from OnePlusfans all across the globe, and has perfectly delivered just what the doctor ordered. In terms of specs, it’s a perfect flagship, and can certainly cater standard as well as heavy usage requirements without any trouble.

In terms of design language, OnePlus 2 and iPhone 6 both can be described as two perfectly crafted beauties of all times. The new OnePlus 2 holds high-end appearance, feels pretty sturdy with aluminum magnesium frame, and is customizable with a bunch of rear panels made up ofKevlar,Rosewood, Black Apricot, and even Bamboo. It feels pretty good, but the only thing which reduces its effectiveness is its hefty weight and thickness.OnePlus 2 weighs at a hefty 175 grams and comes with a thickness of 9.9mm.

The classy iPhone 6, on the other hand, is the slimmest member of iPhone family with mere 6.9mm of thickness.It ships in Space Grey, Silver, and Gold avatars, and stays strong with thick build and an appealing metal shell. The look and feel of this device is extremely alluring, but OnePlus 2 offers more customization with several rear panels, and neither looks ugly!

As far as display capabilities are concerned,the big-screen of OnePlus 2 looks much better and brighter thanthe smaller iPhone 6. On one hand, the powerful flagship killer flaunts a brilliant viewing experience with its 5.5-inch full-HD display, while on the other, the appealingiPhone 6 looks bit weak with its 4.7-inch screen with a resolution of 750 x 1334 pixels.IPhone 6 might not feature the best display, but can certainly give decent viewing experience under lowlight and broad daylight conditions.

Under the hood, OnePlus 2 and iPhone 6 feature decent hardware capabilities, and pack a real punch with smooth and lag-free performance.The powerful OnePlus 2, on one hand, comes in two variants with 3/4GB RAM and powers up by a 64-bit Octa-core Snapdragon 810 chipset clocked at 1.8GHz, while on the other, the masterpiece, iPhone 6 featuresslick performance with company’s own Apple A8 processor clocked at 1.4GHz, paired with just 1GB of RAM. The IPhone 6 looks weak on paper, but when it comes to performance, it works just as fine as most high-end Android phones rolling in the market. The benchmarks also go in favor of both phones, but OnePlus 2 might get a little hot at times.

On the software front, OnePlus 2 runs Android 5.1 Lollipop-based OxygenOS out-of-the box, and comes with a bunch of tweaks for better user-experience. The interface of this phone is almost identical to stock Android, but you’ll get some new features for added customization and quick access to different functionalities. You can use on-screen gestures on this device to launch apps, and turn camera and flash light on by drawing an ‘O’ and ‘V’ on the screen.

The iPhone 6, on the other hand, runs the less-customizableiOS 8 out-of-the box. It will be upgraded to iOS 9 soon, but on both versions, you’ll be getting extremely smooth, slick, and lag-free performance while running multiple apps or demanding games. The interactive interface of iOS is a major highlight for power users.

For photography enthusiasts, OnePlus 2 packs a 13-megapixel rear and 5-megapixel front-facing shooter, while iPhone 6 comes with an 8MP and 1.2MP shooter.The camera performance of this duo is incredibly good, but the iPhone 6, despite of its deceptive on-paper specs, looks like a better choice to consider.It can’t capture 4K videos like OnePlus 2, but can certainly record perfect slow motion videos in 720p at 240fps.

In terms of storage, OnePlus 2 and iPhone 6 both pack limited storage space without any expandable options. The latest flagship killer comes in two storage variants with 16GB and 64GB memory, while the powerful beauty, iPhone 6 offers wider options with 16, 64, and 128GB of internal memory. On both phones, you’ll get sufficient room to keep a massive selection of apps, docs, and media files.

On the connectivity front, OnePlus 2 and iPhone 6 go head to head and pack decent support with options like, Wi-Fi, 3G HSPA+, Bluetooth, and 4G LTE. Browsing on both phones is extremely fluid, but OnePlus 2 packs an added element of USB-Type C connectivity (micro-USB 2.0 in iPhone 6), and iPhone 6 takes heads up with NFC for Apple Pay.

The latest flagship killer, OnePlus 2 looks like a tough competitor for the powerful iPhone 6. Both phones belong to totally different worldswhere iPhone 6 flaunts a premium look with its alluring design language and impressive performance, while OnePlus 2 stands as a perfect budget phone with top-grade specs and decent pricing.In a nutshell, we can say, it was a close face-off, and OnePlus 2 came really close to take on mighty iPhone 6.