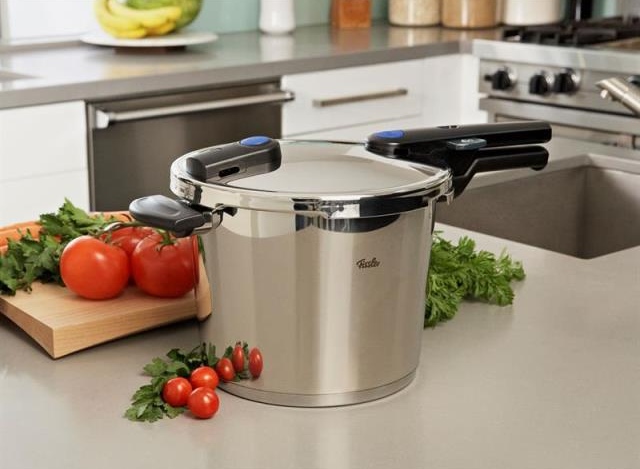 A pressure cooker is a cooking device, which uses the property of increasing the boiling point of the enclosed fluid by increasing the pressure inside. They are quite popular in many parts of the world though some people are still apprehensive about using them. Contrary to popular belief, pressure cooking a great way of cooking your food with a number of advantages.

An average household spends a considerable amount of energy on fuel as well as electricity for cooking. This is not only expensive but it is also harmful for the environment. Pressure cooking decreases a lot of this burden by saving a considerable amount of energy. Moreover, it is a multiple times more efficient than conventional cooking methods. The high temperature attained in a pressure cooker makes it possible to make your meals in an exceptionally little amount of time and as a result you not only make visible cuts in your energy bills but also save valuable time in the process. Besides this, cooking in a pressure cooker enables you to prepare an entire meal in a single vessel, eliminating the need to set up a number of pots and pans on the stove.

Although, a lot of questions have been raised on the healthiness of the food cooked in a pressure cooker, rest assured as they are healthier than you can imagine. This is a major benefit that will convince you to ditch all the previous notions and encourage you to shop for pressure cooker. Studies conducted by experts have suggested that the longer you cook your food, the more nutrients it loses. Also, cooking your food for a prolonged period in a large amount of water drains away most of the essential nutrients too. The pressure cooker with its minimal cooking time helps the food to retain a large portion of the necessary nutrients and minerals, thus perpetuating a healthier lifestyle in the process.

A pressure cooker is a favourite among many people due to its one unique feature; versatility. A pressure cooker can be used as an oven, a baking pan or simply a saucepan. A pressure cooker and the raw materials is all you need to cook yourself a complete meal. This property also reduces a lot of effort spent on washing and cleaning a number of utensils and cooking vessels.

If you are worried about the safety involved with a pressure cooker, you are well-advised to throw away all your pre-conceptions. The application of the latest technologies has made them quite safe for your daily usage. The pressure release mechanism employed in these devices releases excess pressure that may be trapped inside them and eliminates the possibility of any accident. Moreover, as a pressure cooker is a sealed container, it does not allow the heat to be released into your kitchen unlike in traditional cooking wares and prevents it from getting too hot. Thus, you don’t have to deal with hot and uncomfortable cooking sessions during summers.