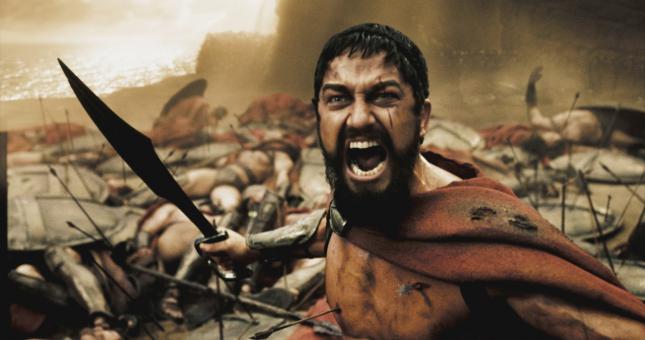 Warner Bros released the “300” in March 2007 and it was a dramatization and fictionalization of a famous battle among history buffs. The Battle of Thermopylae was fought in 480 BC. The film was a commercial success and become one of the top 30 largest box offices. Unfortunately, the film is rather awash in historical inaccuracy and controversy. Critics have been split worldwide, some loved it, while others hated it. Iran denounced the film for its depiction of the ancient Persians, while the movie was received warmly in Greece. Zack Snyder, the director of the “300” called his film as 90 percent accurate historically, adding fuel to the whole controversy.

Persians are almost depicted one-dimensionally as unintelligent and demonic beings. For true history enthusiasts, the film can be grossly lacking in many aspects. The “300” centers around the king of Sparta, Leonidas and it is narrated by Dilios, a Spartan soldier. He is based on a historically know character, Aristodemus, which was also the only survivor from the battle. At the end of the film, we saw that he led the charge of 10,000 Spartans and 30,000 other Greeks against the Persian Army in the Battle of Plataea. The history told us that Aristodemus and another soldier. Eurytus was told to go back home, because they were unfit for duty, due to the eye infection. However, Eurytus went back to the site of the battle and killed. Aristodemus didn’t do the same and considered as a coward in Spartan history.

Gerard Butler played as the King Leonidas and he intentionally provoked the Persian king, Xerxes, to go to war by killing his messengers. The Spartan council won’t agree to start a war and he only has a token force of just 300 warriors to block the massive Persian army in the Thermopylae or the Hot Gates. Leonidas and his followers know that they are unlikely to survive, bit their sacrifice may spur the council to send the rest of the Spartan Army to finally to go to war against the Persians.

The battle itself lasted for seven hours and with the advantageous positions, it was possible for the small Spartan army to hold nearly 7000 Persians. In the film, the traitor was known as Ephialtes, a deformed hunchback and the sympathetic Leonidas declined his offer. He said that Ephialtes’ physical deformities may compromise the well-rehearsed Spartan phalanx formation. Ephialtes is based on the historical figure, an unnamed individual from a village close to Thermopylae, Trachis. He probably never met Leonidas and might innocently inform Persians who asked about alternate routes in the area.

Historically, Leonidas is also accompanied by Thebans and Thespians; but not shown in the film. Other than the 300 elite King’s bodyguards, the whole forces actually reach 1000 soldiers. Regardless of the historical inaccuracies, the “300” is clearly one of the most famous last stands. It is an interesting film that can introduce people to the ancient history of the Balkan region, but shouldn’t be used as a part of the historical lesson.