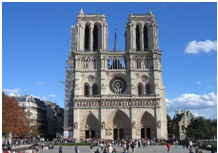 Notre Dame is one of the many iconic sights in Paris. It is a gothic Cathedral which can be found on the eastern side of the Ile de la Cite, which is an island on the River Seine right in the middle of Paris.

Built on 1163 it stands on the site of a previously built Christian church in 528 which itself replaced a building on the site of an ancient Roman temple which was dedicated to Jupiter.

Now, back to Notre Dame.

The Cathedral is true to its gothic architecture with the façade being split across three levels with two towers on top which are connected by a gallery of gargoyles. These gargoyles are as we know sculpture of hideous beasts and they are thought to keep evil spirits away from the church. Sitting directly below this gallery is the most spectacular stained-glass window it is named the Rose Window and is made up of hundreds of stained glass panes of glass and measure sin total over thirty feet in diameter.

The King’s gallery is situated just beneath the stained-glass window and is home to 28 statues of kings of Judah and Israel. Although their country of origin caused confusion for angry mobs in during the French Revolution who thought they depicted French kings and thus set about decapitating every single one of them. The statues were recreated in 1845 by Viollet-le-Duc.

On the outside of the cathedral, the facades are home to three entrances, each one depicting a different religious person. The middle portal is the largest and is dedicated to Christ in Judgement, the one to the left is the portal of the Virgin Mary and to the right is the portal of Saint Anne who was the Virgin’s mother.

Notre Dame has been the setting for many stories and films. The Disney classic Hunchback of Notre Dame tells the story of Quasimodo who first appeared as a fictional character in the novel by the same name by Victor Hugo in 1831. It is thought that the character was basedupon a stone carver who worked on the Notre Dame who was himself a hunchback.