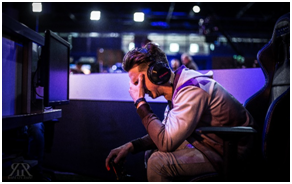 If you do not know what esports are by now, then where have you been? Esports is essentially a term for competitive video gaming. Esports tournaments are held world-wide and the top esports athletes have earned millions of dollars. The fan base of esports are growing by the day thanks to online streaming outlets such as Twitch.

Romain Robe is a professional esports photographer – a job what would not have even existed five years ago. It is Roman’s job to do the job of any sports photographer – take pictures of athletes throughout their various stages of emotion. Only in esports, it is the video gamers who are considered the athletes.

TechMaish: So first of all, could you tell the readers a little bit about yourself – where you’re from, your background as a photographer and your role within esports please.

Romain: My name is Romain, I’m eighteen years old and I come from Perpignan, a town in the South(East) of France. When I first started photography, I fell in love straight away. I can still remember the times I’d borrow my dad’s reflex camera and stage my cuddly toys or my play mobiles. So it’s been ages that I’ve been really into photography. In parallel, I discovered esports on Call of Duty in 2012.

TM: What is it like to be a photographer in esports? Challenging?

Romain: Photography in general is a challenge. To get the emotion, to make a photo come to life, it’s always very complicated. The sensation during a tournament is very different from other shoots, it is really a full experience. All the emotions which mix in a reduced space: the stress, the enjoyment, the disappointment etc… A player can go from laughter to tears in a few minutes. I adore this kind of place; it is a real paradise for any photographer.

TM: Is there an esports photo that you’ve taken that you’re most proud of?

Romain: It’s very difficult to choose just one, even impossible. But if I had to choose I’d probably go for this little series of photos:

Earlier on I mentioned how a player could go from one emotion to another in a couple of minutes, well these two photos are the accurate example of this.

TM: Do you think esports are similar to traditional sports in the sense of the emotions that athletes put themselves through?

Romain: Totally, whether they’re players of traditional sports or players of esports, they all go through the same emotional process. Having known and spoken to two types of athletes during their matches, they all explained, in the same way, the way they were feeling.

TM: Have you ever encountered athletes that show very little to zero emotion when playing?

Romain: Zero emotion, no never and that will probably never happen to me because I’d start asking myself questions whether the athlete is human or not. I was actually really stunned by a French team, the Redworld Synes. Despite their young age, they played the way poker players do, very little reaction and extreme concentration during their tournaments.

TM: Do you have any tricks that you can bring into play when you encounter an athlete who shows very little emotion?

Romain: It depends, it’s really very personal, some players don’t actually care that much. But most of the time, I only get really good feedback from them, they’re happy to have souvenirs from their event. Actually, they’re often surprised by their expressions on the photos, since they’re so caught up in the game, they don’t realise what’s going on around them.

TM: Have you ever had the opportunity (maybe during your free time) to photograph athletes from traditional sports (Maybe a football match)? If so, how does this compare to esports matches? Are the audiences similar? The reactions of the players similar?

Romain: No, I have never taken pictures of traditional athletes. But having assisted to rugby, football and hand ball matches, I would say the emotion is very different, since in esport the events happen in a closed and confined space so all the emotion is much more concentrated.

To learn more about the latest news and esports betting, click here.

TM: When you were approached by Monaco did you expect that being involved in esports photography would be so challenging and so awarding at the same time?

Romain: Yes, totally, since I was little I’ve been preparing myself to become a photographer. I then knew the struggles and inconveniences that come with the job. The challenge in itself doesn’t scare me, I love coming out of my comfort zone and discovering new things even if it means not succeeding the first time around, I’ll always try

TM: The Prize pools in major esports tourneys are massive – do you think this brings out more emotion in the players?

Romain: Actually, money is a big factor that can encourage more emotion. But it’s far from being my first, passion and competitive spirit are the main parameters for the players I think. 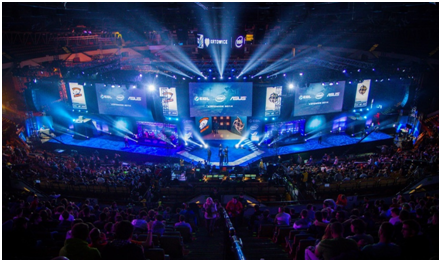 TM: Have you ever had the opportunity (maybe during your free time) to photograph athletes from traditional sports (Maybe a football match)? If so, how does this compare to esports matches? Are the audiences similar? The reactions of the players similar?

Romain: No, I have never taken pictures of traditional athletes. But having assisted to rugby, football and hand ball matches, I would say the emotion is very different, since in esport the events happen in a closed and confined space so all the emotion is much more concentrated.

TM: From a photography perspective, what advantages and disadvantages does this give you?

Romain: Being in a small space and having the opportunity to be close to other players helps me to take better photos. I feel like I’m more in the moment and also I’m able to capture the player’s emotion rather than being something like 80 meters away from him which is what football photographers are.

TM: Have you ever had a situation where an esports athlete has begun to cry after losing? If so, is it ever uncomfortable taking a photo of that happening?

Romain: I haven’t yet had the opportunity to be in that kind of situation. I don’t think it would be awkward though, it’s my job to capture athletes during their attempts at victory, whether they win or lose.  Nevertheless, before posting the photo of the person on my website or on social networks, I would ask for authorization from the person in question.