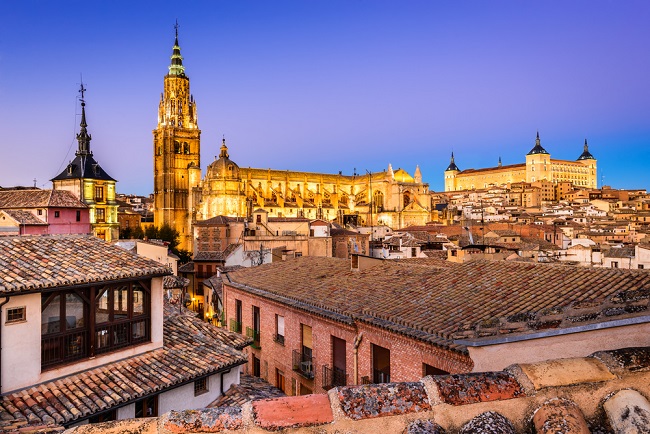 Following are few places that you can visit, if you are planning to visit Madrid to enjoy your vacation.

Within one-hour drive from Madrid, there is a town of San-Lorenzo-de-El-Escorial, which is mostly dominated by the large palace-monastery that was built by Philip-II. It is now declared as a World-Heritage-Site, this place is Spain’s most beautiful monuments and you can find wealth of artwork and also lots of tombs of Spanish royals.

The charming place with its streets can draw many visitors. It is also a World Heritage-Site, where you can find Christian, Jewish and Muslim architecture. Following are few places which one must definitely see, if you ever happen to be there.

Segovia is a very picturesque city having its appeal due to its medieval charm. Like Toledo, here too you can find beautiful little alleyways, particularly the Jewish-Quarter, which one must visit. In addition to that there are Plaza Mayor, Segovia Cathedral, the Alcázar and also the beautiful Roman-Aqueduct which is dating back to 1st century.

Ávila can boast for having numbers of Gothic and Romanesque churches, and also medieval-era walls that is encircling the whole city’s interior. The Basílica-de-San and the Vicente Gothic Cathedral are 2 other popular attractions.

This mountain range has got stunning scenery, with diverse flora/fauna, and many hiking trails. It is located between Segovia and Ávila and its hillsides also include the Peñalara-National-Park, and also there is rock formations near the Manzanares River which is known as La-Pedriza. This place is also an important location for various mountain sports e.g. skiing or snowshoeing during the winter and mountain biking and also rock climbing.

This fortress town is also known for its old-fashioned appeal which is similar to some other places however it can offer you a sight that you will not find anywhere else. There are few hanging houses that perches atop the profound gorges of rivers Júcar and Huécar. Cuenca has also got assortment of multicultural religious architecture, e.g. El Castillo which is an Arab fortress and the other is Cuenca Cathedral.

This is also a World Heritage Site, located at the beautiful town called Aranjuez which served as a summer-palace and hunting-grounds for olden days Royal family.  Its majestic architecture can compete with the Royal Palace which is there in Madrid and the magnificent gardens which is sprawling across 750-acres are right for an exploration.

You can also add Chinchón in the list of towns that you can never miss simply because of its charm. When you are here on any day, you must pay a visit to emblematic Plaza Mayor, which is famous for its very irregular shape that was formed by the medieval balconied houses.

There are cobbled streets which are located along the river-Henares and located in east of Madrid, which is a well-preserved charm of medieval days. There is a Gothic Cathedral and also the Universidad-Complutense which is one of the very old universities of the world. These are the popular attractions, and also few recently excavated sites with public baths and a Roman basilica.

The Christian, Jewish and Moorish quarters offer a very delightful blend of architectures from various cultures. The city is also known for birthplace of Miguel-de-Cervantes the author of Don-Quixote.

In case you too are big fan of work of Cervante then visit to Consuegra next. This town is well-known since the sixteenth century for its numbers of windmills. Other well-known sights are the Castle-of-Consuegra and the-Renaissance-style town hall.

You can also visit the website http://www.tripindicator.com/madrid-day-trips.html to explore more information about this place.