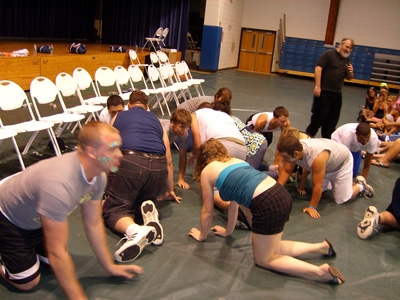 Stage hypnotists are among many entertainment professionals who use hypnosis as a form of enjoyment that can be presented on the stage. However, there’s a degree of controversy that surrounds this. Hypnosis is not a pseudo-science and it has been validated by the medical society as a way to access the inner part of our mind. However, it appears that stage hypnosis can be employed to induce hallucinations and false beliefs. When designed properly, stage hypnosis can be really entertaining, although this could be quite awkward for the “hapless victims”, when they re-watch the show. There are different concepts of stage hypnosis that we need to know.

In this case, we often see how stage hypnotists give brief introduction on each session. He inserts the necessary pre-talk and this is not only to inform the audience about the session, but also gives the assumption that these hypnotists are the actual experts on the subjects. Hypnotists know that one of the biggest problems is to make people get hypnotize and cause others to believe about it. This is the early element of induction and the audience could actually be “hypnotized”, although not in the actual super-relaxation manner. The hypnosis session may include suggestibility ideas and hypnotists.

Once a number of subjects have been selected, the entertainment part of the entire show may commence. The suggestion may range in complexity from simple convictions to complete hallucinations. As the hypnosis shows progress, the entertainer is able to increase the entire value of the entertainment. They may start with catalepsy and ended with hallucinations. One common ploy used by hypnosis entertainers is by using verbal triggers. Hypnotists may cause laughter among the audience by “accidentally” saying the verbal triggers and the subject will be affected by the suggestion, such as leaping out their chair. Sometimes, hypnosis entertainers add music to make the entertainment feels and looks more dazzling.

When the show ends, the hypnosis professional will remove any suggestion from the subject and even all memories associated with the event. They will be sent back to the seats and show has ended. When the show is impressive enough, he will get a standing ovation. The hypnosis show can be very appealing for people who haven’t seen it before. There’s a sense of awe, anticipation and a hint of fear in the air. In reality, the hypnosis professional also feels the same thing. There’s no guarantee that his show will work well. These entertainers need to rely on their knowledge and experience to ensure a success. Appearing confident in front of the uncertainty is no small feat. Hypnosis shows isn’t without controversy and many people would say that they won’t pay for any kind of show that humiliates people so openly.

It is possible to practice stage hypnosis and it is also a good idea to design our own show, instead of using the common format. Just like in the medicine field, entertainers should do no harm, socially, mentally and physically.