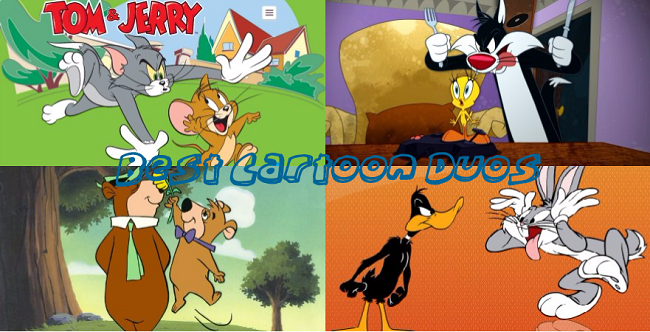 Kids simply love cartoons and great cartoon characters more so. Making a list of the favorite cartoon duos is a pleasant, but a difficult task, because there are many cool cartoon duos that appeared on TV. The key to making a cool cartoon duo is very simple: one of the characters is completely different from the other character of the duo with completely different appearance, habits and behavior. For example, if one character is short, fat and smart, the other one would be tall, thin and very dumb. Also, the two characters usually are not in great relationship. This is a “formula” that worked in most cases and many great cartoon characters have been made following this formula. With a cool and entertaining duo of cartoon characters, it is certain that the cartoon will be adored by the audience, whether watching TV or free cartoons online on a website. With no further ado, here are the best cartoon duos ever created.

Tom & Jerry – Tom and Jerry are the best thing ever happened in every kid’s childhood memories. These two great cartoon characters are created by William Hanna and Joseph Barbera, under Merto-Goldwyn-Mayer studio. From 1940 to 1958, William and Joseph produced 114 episodes with the interesting cartoon duo, winning seven Oscars for MGM in between. The episodes feature the interesting and never-ending battle between cats and mice, with the difference that this cat, Tom, uses all types of weapons, like guns, pistols, bombs, poison, hammers, forks, etc. But sometimes, Tom and Jerry have shown a strong friendship and that they cannot live without each other.

Tweety & Sylvester – Another cat and a tiny yellow canary, Tweety and Sylvester are easily one of the best cartoon duos of all times. This cartoon duo is recognized all around the world and it was featured in lots of short and long cartoons. The cat Sylvester is a pet of a grandma and always comes up with new plans to catch Tweety and feed his tummy, but the yellow canary is very smart and always finds a way to escape the many traps of the cat. For those who have not watched a carton with this duo, there are many web sites offering free cartoons online.

Yogi Bear & Boo Boo – Yogi Bear and Boo Boo are two cheerful and happy bears that are always hungry and stealing food from the visitors of the Jellystone Park. These two great cartoon characters were first introduced in 1958 and only three years later, Yogi and Boo Boo have earned their own cartoon show. While Yogi is the smartest bear of all bears, it always ends up by Boo Boo saving them both from troubles. Check out some free cartoons online and see if there is a cartoon with this duo.

Bugs Bunny & Daffy Duck – The last duo of this list is composed of two great cartoon characters and it stands out from many others. Although both Bugs Bunny and Daffy Duck could succeed as individuals, they have an exceptional chemistry that allowed them to work perfectly with each other. Bugs Bunny is very often a target of many rabbit hunters, but it is a clever rabbit with many ideas how to escape dangerous scenarios. Daffy Duck is a victim everyone enjoys to watch suffer. Egoist, over-confident and a spluttering duck, it is always very fun seeing these two characters making every usual activity different and hilarious.