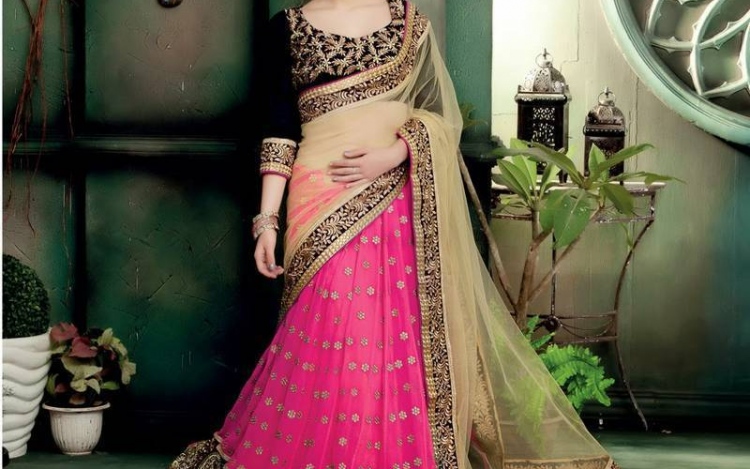 India has a very old and rich heritage and culture which is reflected in many aspects of day to day lives of Indian people. The color and appearances of clothing worn by men and women varies from ethnicity and location of people, but Lehengas are quite an exception to this. Lehengas are worn by nearly all women in India whether they are from east or west, north or south. But the looks and style of Lehengas change from region to region of India as well as names of Lehengas.

Lehengas are called as Ghagra in Hindi,Punjabi, Urdu, Kashmiriand Gujarati cultures while being called as Pavadai in Tamil and in Tamil and Kannada they are known asLanga. With such a variety of names for lehengas we also are presented with a lot of designs and colors that are symbolic of these cultures and ethnicities. There are a lot of forms of embroideries used to make designs namely: Bagh, Chikan, Kashida, Kasuti, Kantha, Sozni, Shisha, Zardozi, etc. with various forms of stonework to create such heavy designs that bedazzle the eyes of anybody that takes a look at them imparting heavenly looks to the women wearing these marvelous pieces of clothing.

In today’s world especially in North Indian cultures, it is considered an unspoken mandatory for the girls to wear designer lehengas on the day of their marriage. As the lehengas are made with respect to the shape and size of the body of the person supposed to be wearing it. The girls and women also find it a very appealing thing to wear designer lehengas as they accent their body structures and add a regal look to their form. The advent of fashion designers has added a whole new dimension to these good looking lehengas.

Besides their great appearances and heavy work on theexterior, the designer lehengas also make up a very big industry. A designer lehengas on an average costs more than 1,00,000 INR making it a very bright and high paying industry for the people who work in it. The main reason most brands and big names of fashion are entering this market sector of designer lehengas is because of the very high profits and revenues that can be made awhole year long. Also, people like to get their outfits customized and built to their specifications so that they can get desired looks for their occasion.