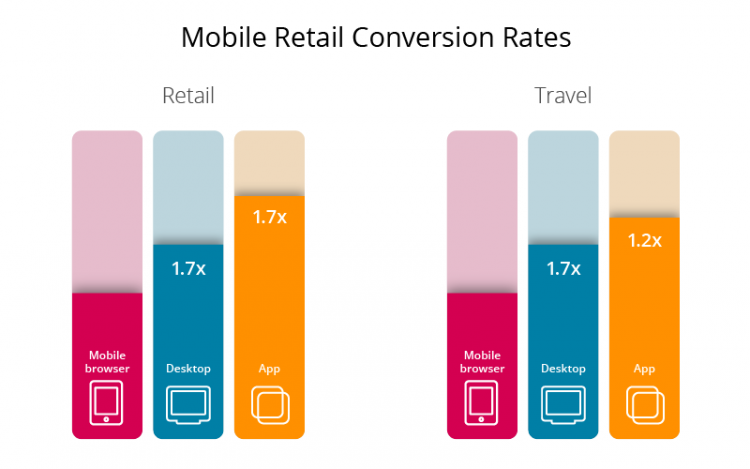 Mobile optimization doesn’t stop with the making of a mobile friendly website; it encompasses apps as well. Yes! You heard it right, being one of the top most searching platforms, the king that is used by n number of internet user to search anything from everywhere: Mobile. There are companies who are making websites that are compatible for SEO as according to the reports of it is clearly stated that mobile is now taking place on mobile instead of the desktop. And because of all theses SEO companies are now forced to extend their efforts and make a move in the directs of apps allows. Now they need chalk out an SEO action plan that suits all the three domains, i.e., mobile website, desktop website and apps.

In a recent study, it was found that there are so many companies who do not have their own mobile website. As well as there is high conversion rate in both travel industries and retail industries on the mobile website vs. mobile app.

The biggest drawback to having an app is that if you cannot find it you cannot download it, and here comes the work of SEO, now SEO must me done in a more focused way, the coverage has widened as there is an invention of almost a new domain for SEO. Now SEO must be focussed in app discoverability.

As the recent data, there are almost  1.6 million apps in July 2015 apps present in google play store excluding the windows apps and ios apps. The hot topic of the season is how do SEO discover apps out of theses plethora of apps.

For instance, according to the recently announced suggestion, apps can be found by following the same organic search which is used to fund webpages, encouraging the new users to download the app in order to engage with the contents. The apps which were locked previously in can now be easily found.

App indexing: App indexing is a method that can be used to find the apps. Brand that are willing to sell their app can try this method called app indexing which will allow the search engine crawlers to index the app via deep links.

Words of Wisdom: Currently app indexing is only available for Android apps. Testing on iOS is also on. But Google for obvious reasons works for Android phones.

So, if you are a search engine optimizer, and you are not doing anything regarding the app, then you start doing and start increasing the discoverability of your clients app also. Now SEO is not restricted to websites only; there is prime need of a more holistic approach for greater visibility.