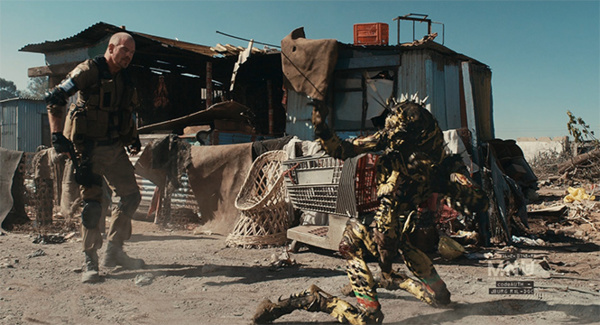 District 9 is a unique film about extra-terrestrial. Just like the popular TV series, Alien Nation; it’s not about the enigmatic encounters with mysterious beings from outer space. It explores a situation when a large group of aliens live among human for a period of time. In the film, an alien spaceship landed on Johannesburg, South Africa. Instead of represented as superior creatures with highly advanced technology, these aliens are actually malnourished and they have no way to go home. The District 9 is a camp built by the local government to house these aliens until a proper course of action can be determined. However, the situation drags on for 20 years and the local human population have had enough.

The main storyline takes place when an organization, Multi-National United, that deals with these aliens; plans to relocate them farther from Johannesburg, about 200km outside the city. Sharlto Copley plays the role of Wikus Van De Merwe who gives eviction notices to these aliens. The derogatory name for these aliens is “prawns”, due to their resemblance to the crustaceans. However, Wikus is exposed to a chemical that cause a transformation. While Wikus seeks to reverse the transformation, MNU tries to stop Wikus from doing it. The District 9 delivers us common social dilemmas and although these aliens are not human; they are subjected to “human rights violations”. This brings us a question whether a non-human species has similar rights to human.

District 9 is clearly a movie with thick social issues and we clearly see different ethical problems. Wikus is facing this dilemma. By helping a main alien character (played by Christopher Johnson) in this film, we could potentially endanger the human race. District 9 creates characters that allow the audience to have emotional attachment to them. Viewers will eventually establish sense empathy for Christophers and Wikus. As both characters are dealing with their own plights, they start to help one another. This condition is enhanced by a good filming technique. In the first 45 minutes, the film is told through a series of interviews about the preparation of the eviction and how Wikus is exposed to specific chemicals.

Just like what happens to any person, we could also see indecisiveness and how people can change their minds rapidly. After Wikus begins to transform, his wife says that she can no longer love him, but then she calls again and tells him that she still loves Wikus. At first, Wikus simply wants to save himself, but after a series of events; he becomes a self-sacrificing individual. Like many good films, there are always some minor flaws and we can overlook them. District 9 is a good film that teaches us about social values and humanism. This can be translated into interracial relations in real life. There’s obviously a good reason why South Africa is used as the settings of the film and it tells us that a “New Apartheid” could still happen in the future.