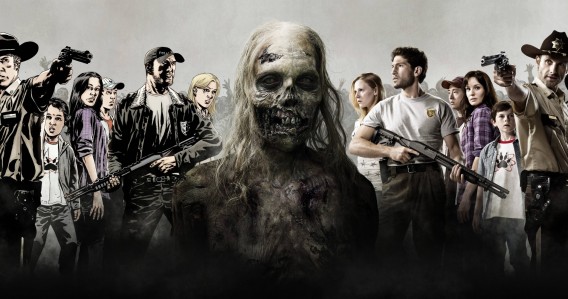 Humanity’s huge obsession with the living dead seems to be a type of collective consensus. Zombies are not like typical monsters. We are not only afraid of zombies, but we also have fear of becoming zombies ourselves. The dual-fear factor may intrigue people, causing them to watch many films and TV shows related to this subject. When watching these shows, we may also imagine that we become infected and becoming the lumbering, mindless hunks of flesh. We fear that a newly mutated or engineered zombie virus will be released to the general population, laying ruins to the whole society; affecting our family, friends and many other things that we know. It would be a daily struggle to avoid the deadly virus.

The thought of being trapped by thousands of zombies can be frightening and we see in these films that the humanity itself is being threatened by complete extinction. Zombies may also represent the mechanical-like behaviour of modern people. We see how people habitually perform their daily lives. Corporation, government, military and even education institution is run by “zombies”. Another interesting factor of zombie-related films and TV shows is the presence of survivalists. They are not death-defying, gun wielding heroes; who smash zombies left and right. They are ordinary people who act and behave like us. In order to complicate things, some of these survivalists are the actual villains and they can be even more dangerous than zombies.

It’s rare to see that big muscles and guns solve all problems. The real problem is what’s happening inside us. In the middle of this situation, love, empathy and compassion are also needed. They are things that can help to defeat the zombie horde. Some of the good characters want to find the cure to the virus; while others simply want to bring the survivors to safety. In the end, it is hope and love that seems to bring the whole society to safety. Trust me, all of us want to saved and protected. Those decaying zombies may no longer be saved, but we do want to find solace and protection.

Again, our society is far from being perfect and we continue to deplete natural resources. The modern lifestyle has also caused many people to have broken spirits and they tend to do things lifelessly. In many developed countries, people need to work more than 9 hours each day, excluding the commute time. We all want to escape and survive from this lifestyle. First, it is important for us to educate ourselves and it would be much easier for us to educate ourselves. More and more people want to take the survivalist lifestyle, by becoming gun-toting individuals like in those zombie movies. The big corporations often think only about profit, just like zombies who crave for fresh meat. There are many lessons we can take from zombie movies and we can take some positive values, to become better and freer individuals.