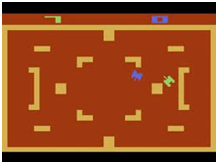 As a child growing up in the Nineteen Seventies and Nineteen Eighties one of the most exciting things you could do on a wet Sunday afternoon was wage total tank war on you Dad, Grandad or mates with a cartridge game that you plugged in the back if the telly. Yes, Gran would insist that it was off by the time Antiques Roadshow and Last of the Summer Wine came on. That gave you the afternoon and you knew that eventually, the toils of the working week and cooking the Sunday dinner would lead to the family falling asleep in their chairs. Why bother watching Torburk on the Tv when you could recreate a very no accurate portrayal on you Atari? If I had the chance I’m sure that I would have liked to have a go at real Tank Driving and I could Experience what its like to drive a tank with Armourgeddon if I so fancied it. For now, though the Eleven-year-old me had to make do with this.

Ok, so the graphics were not exactly what you might call realistic. No self-respecting Tank commander is going to be prepared to enter the field in a Dark blue tank as that would suggest that it might stick out a bit. A lime green one is hardly a good idea either. What is compounding that problem is that this war zone seems to be conducted on red asphalt and around a maze. The Tanks did not look like the spiffing ones on the front cover of the box truth be told. Weirdly this was an age where the front cover of a computer game bore the very little resemblance to the game content inside. There was a quite a fair bit of imagination required to see it through. Only one company, Firebird, put the actual graphics on the front of the cassette tape this being a ZX Spectrum game as opposed to the Atari console.

How did you play it? Well, luckily you had a Joystick to help. This made your tank move forwards and backward. You could rotate the tank to the direction you wanted to go and to fire. The programmers couldn’t get the Atari processor to fit in the ability to rotate the turret so basically, it was forward fire only. What was lucky was that you must have fired compound rubber shells as they would bounce off the wall if you got the shots right. This suggested the tanks were armored with something akin to cardboard.

There were two tactics to take. The first was that you rushed out from behind your start point and panic your Dad/Grandad to move out as well. It was likely the joystick would confuse them and they’d drive into a corner where you could pick them off. The second was a “gentleman’s agreement” where you would simply stay where you were and try and get the perfect reflective shot.  Then your maverick cousin would ignore that and try and rush you anyway and it would get turned off because it had started an argument.