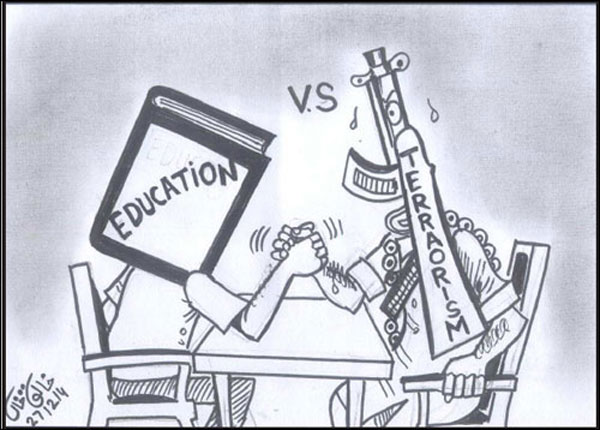 Since last year, not a day passed by where i didn’t switch off the news being saddened by what humanity has come to. Everyday, there is a new bomb blast, a new terrorist activity. Everyday hundreds of people suffer at the hands of terrorism. Our children are being brought up in a world where they are surrounded by death and yet they seem unbothered by the fact that their fellow brothers and sisters are dying in another part of the world right now because it is an everyday news.

There are many groups and militaries fighting terrorism globally, putting their lives at risk to save us. However, fighting terrorism with arms and weapons will not finish it rather ignite it. We need to think of a strategy that is above all this. Something, which affects the roots of extremism and stops it from replicating.  Spreading education can help us achieve that goal. Terrorism cannot be defined as a particular religion or community, it is a single minded operation to destroy others for its own agendas. We will be discussing few ways in which education can be used to eradicate terrorism completely and restore peace in this world.

By making our efforts to educate the world, we can one day live in a world that is free from terrorism. There will be no more killings and deaths followed by the misery of thousands. Terrorism can be fought by educations and employment opportunities provided to the people.

Author Bio: This article was written by Linda Lee, who is a graphic designer by profession. She likes to write in her free time at assignment help service . She is an art enthusiast and loves music.