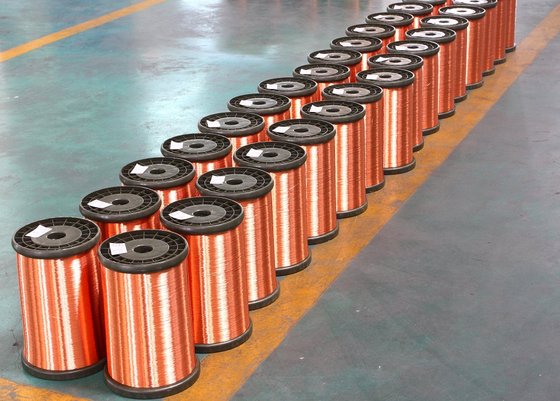 Enamelled copper and aluminium wires are all around us.  Electric transformers, generators and motors use these wires to create and utilise the electromagnetic fields which allow the transformation of energy.  The more turns of wire, the greater the electromagnetic field.  The closer the wires are together the greater the electromagnetic field that can be created in a given space.  Enamels are typically only 0.05mm thick allowing for very compact winding; which also brings its own problems associated with the heat the electric current flowing through these tightly packed wires creates.  So enamels have to withstand relatively high temperatures, up to 240°C, and provide a high level of electrical insulation to prevent the wires shorting against each other.

On the generating side, enamelled winding wires are used in smaller generators, wind turbines and even wind-up radios, with paper or yarn insulation used in heavy duty power generation systems.  Electric motors made with enamelled wire are found in cars, planes and the myriad of electric appliances around the home.  Different types of enamel are used depending upon the environment from low temperature polyvinyl types through medium temperature polyesters to high temperature polyimide versions.

But are enamelled wires used elsewhere?  Enamels come in many different colours and are made from inert organic compounds.  This makes them perfect for jewellery, allowing brightly coloured designs to be created from a range of colours and dimensions.  Not so common now are wire-wound potentiometers.  Before the advent of solid-state versions, wire wound resistors were found in all voltage control systems.  Those control dials and sliders you see in 1960’s and 70’s sci-fi films would have had wire wound resistors underneath them (if they actually did have anything!).  Enamelled resistance wires were wound close together and then the enamel was removed from a line along the length of the coil.  A slider made contact with this bare line and it was used to vary the voltage in the circuit.

A more recent application has been in the field of polyethylene pipe fittings for the gas or water pipes running under our streets.  Next time you pass a hole in the road have a look, without getting too close of course, at how the pipes are jointed.  One method is to push the ends of the two pipes into a coupler which has two terminals protruding from it.  This is an electrofusion fitting.  Inside the coupler is a spiral of heating wire which is attached, via the two terminals, to a portable generator which applies a current to the coil and heats up the connecting surfaces of the pipe and the coupler.  In just a few minutes the assembly is completely fused and a gas-tight joint has been created.  These heating wires are made from a range of resistance alloys from Copper/Nickel to Iron/Chrome/Aluminium and even the pure copper and aluminium used in ‘normal’ electric cables.

Some designs have coils of wire where the turns are close together and when the polyethylene melts they can move and short out against each other.  Coating the resistance wires in a high temperature enamel, <link to SPW enamelled wire>, provides just enough insulation to prevent electrical contact and allow the fitting to complete it’s fusion cycle.  It’s a one shot use, but it allows fitting designers to make all sorts of different pipe connectors, from straight couplers to branching Ts, some of which can even be fitted when there is still gas running through the pipeline.