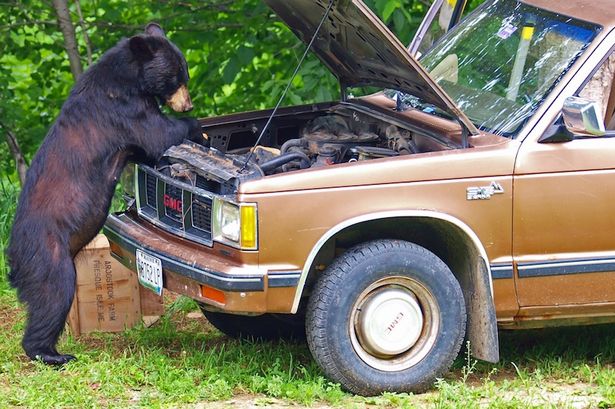 National parks in North America are known for their scenic wilderness, which attract millions of people each year. These parks can be found in United States and especially in Canada. There are many less-travelled parts of the national parks if we are willing to venture outside the designated paths.

In fact, hiking in national parks can be an adventurous, exciting and rewarding activity. However, we should be aware of a few potential hazards, such as snowfall, thunderstorms, steep terrain, falling rocks, waterfalls and of course, wildlife. Unlike in many ecosystems, especially in Africa, the wilderness in North America doesn’t have large creature that could potentially harm people, except the grizzly bear. It is a powerful animal that weighs up to 500 pounds and it can sprint as fast as a horse. They are found across Alaska, Canada and northern parts of the United States.

These bears are omnivorous. They can eat winter-killed carcasses, fresh fish from the stream and new grasses. Grizzly bears are known for their excellent sense of smell and it can lead them to food sources a few miles away. Like any animal, grizzly bears are actually wary of people and they tend to avoid a group people. However, there are cases when outdoor travellers accidentally encroach their territory and bad things could happen. We should know whether we are in a bear country or not. Bears are unlikely to confront a group of hikers, especially when they make a lot of noise.

So, when we find ourselves walking alone in a bear country, we should simulate the activity of multiple people and make variety of noises to warn bears in the territory. However, we could accidentally surprise a bear in a thick forest, so we should carry a paper spray for the last resort.

It should be noted that bear encounter could be especially dangerous when it has a cub. Bears are very protective of their cubs and anything perceived as a serious threat can be attacked ferociously, even if it means life and death. Although at a lesser degree, bears are also known to be quite protective with their food sources and they will oppose anything that may steal their food. In general, despite these patterns, bears can also be quite unpredictable, so they could still attack us even if it is alone, has no food source nearby and not surprised.

Because bears have good sense of smell, it is important to tightly seal any food in our encampment and there are many cases of tents being ransacked by bears. We should hang food containers more than ten feet off the ground when we need to leave our camp. Also, meals should be prepared more than 100 yards away from our main camp site to divert bear. Make sure to make a lot of noise when cooking to deter bears from approaching. In general, we could generally be safe if we are fully aware of our surroundings.