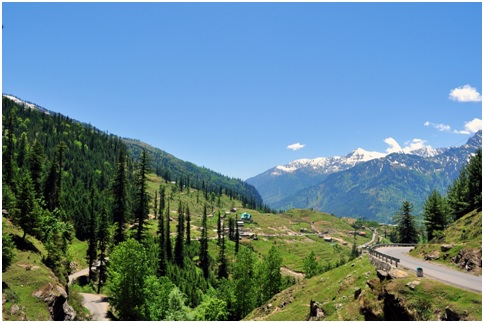 It is a fascinating hill station located in the state of Uttarakhand at an altitude of 2000 metres. It is popular for its lovely weather and natural beauty and often called the ‘Queen of hill stations’. Mussoorie offers breathtaking views of the Doon Valley and Shivalik ranges. The highest point in the region is LalTibba which is at a height of 2290 metres. Dehradun lies at a distance of only 35 kms from Mussoorie and can be reached in one hour via Dehradun to Mussoorie cabs. The weather in the city is generally bright, clear and pleasant throughout the year, except during the months from June to August when it rains heavily.

The hill station of Mussoorie is also the entry point to Yamunotri and Gangotri, the popular religious shrines. The four shrines of Yamunotri, Gangotri, Kedarnath and Badrinath form the Char DhamYatra which are of great importance in Hindu religion.

There are numerous popular tourist spots in and around Mussoorie, few of which are mentioned below.

You will enjoy the ropeway ride from Mall road to the Gun Hill, the second highest point in Mussoorie. The ropeway distance is 400 mtrs and it takes around 20 minutes to reach. After reaching the Gun Hill, you will get panoramic view of the Himalayan ranges and a bird’s eye view of Mussoorie town.

These exhilarating waterfalls are located on Chakrata road at 13 kms from Mussoorie. The location is surrounded by picturesque mountains and is a great place for family picnic.

Spend some quality time with your friends and family in the beautiful garden which has an artificial mini lake. You can also enjoy the boat ride in the lake.

Known as the “Lake District of India”, Nainital is among the most popular hill stations in India. The picturesque town is surrounded by mountains on its three sides and has the beautiful lake Naini Tal at its centre. Nainital is a popular weekend gateway from Delhi and the most convenient mode of travel is by Delhi to Nainital cabs.

The Britishers discovered Nainital as a holiday resort in 1841 and it acted as the summer capital of United Provinces during the British rule. The sparkling waters of this mountain lake continue to retain its charm and entice tourists from all across India.

Nainital is an ideal place to make a base point and explore several other lesser known hill stations around it that are connected through well laid out motorable roads. Sightseeing points around Nainital offer breathtaking views of Himalayan peaks on one side and the plains on the other. You will love the refreshing walks along the narrow wooded lanes through forests of pine, oak and deodar. Visit the older areas of Nainital to feel the old colonial charm as they have plenty of sprawling bungalows, churches, schools and the old Christian cemetery.

Don’t forget to do popular tourist activities in Nainital like boating in the Naini Lake and roaming around the Mall road. Nature lovers come here for trekking in the densely forested that surrounds the town. Dehradun, the capital of Uttarakhand, is located 294 kms from Nainital. If you plan to travel, Dehradun to Nainital cabs can be easily booked online.