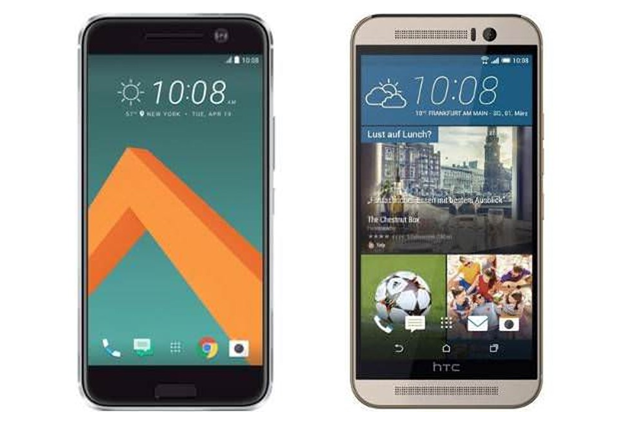 Various smartphone manufacturers like Samsung, LG, Xiaomi and Sony have already unveiled their latest flagship offerings at this year’s MWC in Barcelona in February. Now it’s HTC’s turn to unwrap its latest loaded flagship smartphone in the One series – therumored One M10. The Taiwanese manufacturer has set April 12th as the launch date for its new flagship, and has confirmed that the phone will be just called HTC 10. The brand has been teasing the HTC 10 from a while, and has confirmed a few features of the flagship. The HTC 10 will come as the successor to HTC’s last flagship, the One M9, which was unveiled at MWC in February 2015.

HTC has already released a few follow ups to the One M9, the One M9+ and One A9, but the true follow up to the device will be the HTC 10. The HTC 10’s unveiling is just a few days away, but if you are eager to know what’s the difference between the One M9 and 10, let’s compare the latter’s rumoured specs with its predecessor.

HTC One M10 vs HTC One M9: features compared

The HTC One M9 was released with the same dual-tone metal design found on its predecessor, the One M8. It gets an aluminium body complete with brushed finish at the rear panel to show off the premium metal design. The device measures a tab thick 9.6mm around the waist, and tips the scale at 157 grams. The phone also sports BoomSound front-facing speakers for immersive media experience. The HTC 10 on the other hand is rumoured to arrive with a flatter and sleeker full metal design. The phone will sport chamfered edges on the front and back. It is also rumoured to get a fingerprint sensor for enhanced security integrated directly into the home button. As per a recent teaser video, the device will get the best BoomSound speakers yet. In addition, the HTC 10 is also rumoured to finally pack in water-and-dust resistance capabilities. Overall, the HTC 10 will certainly be a better looking device than its predecessor.

The HTC One M9 features a 5-inch Super LCD 3 display with a resolution of 1,920 x 1,080 pixels. The phone delivers a crisp media experience with detailed colour production thanks to a decent pixel density of 441 pixels per inch. The HTC 10 on the other hand is expected to flaunt a 5.1-inch or 5.2-inch display. The device will utiliseshigher-resolution quad-HD (2K) screen and an AMOLED panel instead of LCD. In this case, you can expect the One 10 to offer sharper and clearer images and videos thanks to the increased pixel density of 576ppi. The HTC One M9 was launched running Android 5.1 Lollipop with Sense 7 UI on top, but has since been updated to Marshmallow. The HTC 10 is expected to run Android Marshmallow out of the box with the latest HTC Sense 8 UI on top.

HTC used the best available chipset at the time from Qualcomm, the Snapdragon 810, when it launched the One M9 flagship. The Snapdragon 810 SoC of the phone is further supported by 3GB of RAM. The phone offers a smooth lag-free user experience even with the high-end games and apps. The HTC 10 on the other hand will be powered by the latest and more powerful, the Qualcomm Snapdragon 820 processor. The phone is said to arrive with 4GB of RAM and the latest Adreno GPU available to pair with the Snapdragon 820. So it will be certainly offering better performance than its predecessor. As for storage, the One M9 arrived with 32GB of expandable memory. Its successor is also expected sport the same 32GB of internal storage.

Moving on to the camera, the HTC One M9 boasts a 20-megapixel primary snapper, coupled with f/2.2 aperture, a dual-LED flash, 4K video recording and autofocus. For selfies and video-calling, the device gets an UltraPixel front snapper with f/2.0 aperture and full HD video recording support. The HTC 10 on the other hand is rumored to sport a 12-megapixel UltraPixel primary camera sensor complete with laser-assisted phase detection autofocus, optical image stabilization and wider aperture of f/1.9. For selfies, the device is expected to get a 5-megapixel front-facing shooter. You can expect the HTC 10 to deliver better imaging experience than its predecessor.

In terms of connectivity, the HTC One M9 offers 4G LTE support including Indian 4G bands, Wi-Fi with latest ac standard, Bluetooth 4.1, NFC, an Infrared blaster and A-GPS. The HTC 10 is also expected to offer the same connectivity options as its predecessor. The HTC One M9 is powered by a decent 2,840mAh battery, while its successor is expected to arrive with a bigger 3,000mAh battery unit.

The HTC One M9 is still one of the best smartphones from the Taiwanese manufacturer till date. It sports a pure metal design, best audio experience, colour-rich pictures and videos experience, great camera specs, powerful configuration and latest OS. The phone is available in the online and offline stores between Rs 23,000 and Rs 30,000. The HTC One M10 or just 10 will bring several improvements over its predecessor including a sharper display, a better design, better BoomSound speakers, more powerful configuration and camera features, and a bigger battery. In addition, the handset will also get a fingerprint sensor and a water- and dust-resistance design. It is expected to be launched between Rs 45,000 and Rs 50,000 when it lands in India.